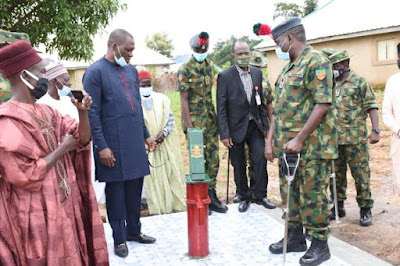 As part of its commitment to provide social amenities to its host communities, the Defence headquarters on Thursday commissioned five boreholes in five communities of Taraba State.

The five boreholes were sunk by the Department of Civil-Military Cooperation in the office of the Chief of Defence Staff of which two were sited at Wukari new site and Rafinkada in Wukari Local Government Area, one at Akate in Donga local government area and two in Chanchaji and Takum communities in Takum LGA of the state.

Chief of Defense Staff (CDS), General Gabriel Olonisakin, while commissioning the project stated that the projects were sited at the various points to address the water needs of the benefiting communities in addition to the security being provided in the areas.

Represented by Rear Admiral Abdul Adamu, the CDS said the project was initiated completed and handed over to the community by the military as one of the ways to pay them back for the peaceful manner in which they have continued to conduct themselves.

“As you are all aware, the military have various operations across the country due to the numerous security challenges. Operation Whirl Stroke (OPWS) being one of them covering Benue, Taraba and Nasarawa States.

“Now the military operations have been using kinetic operation but the chief of defence staff noticed in his wisdom that there should be this kind of gesture that could yield more sustainable peace because when you restore peace in a community, there should be something that could sustain the peace.

“Therefore, the project is meant to cement the civil and military relationship in the state. These projects were initiated by the CDS, General Gabriel Olanishokon and the purpose of the projects is to sustain the peace we have restored so far using kinetic and non kinetic approaches.

He enjoined the benefitting communities to protect those facilities in their domain and live in peace so as to attract more developments, saying there can be no meaningful development in an environment devoid of peace and security.

The CDS promised to sustain reward for peaceful communities with many more socialamenities that could add value to the lives of the people.

On his part, Governor Darius Ishaku of Taraba state commended the CDS for coming to provide water projects in the benefitting communities.

Ishaku who was represented at the occasion by his Special Adviser on Security Matters rtd Col. Wunuken Agyo, acknowledged the wonderful performance of OPWS troops in the restoration of law and order in the areas where destruction of life and property was the order of the day.

“I want to use this opportunity to appeal to people of the state to accord maximum cooperation to the people serving in the Commission of Inquiry for the Jukun/Tiv crisis to be able to proffer solutions to the crisis.

“Before now nobody dared ply the Wukari, Akate and Takum roads due to the activities of armed bandits but with the presence of OPWS, people can now ply the roads freely without harassment and intimidation by these criminal elements,” he said.

In their separate remarks, chairmen of Wukari local government area, Dr Daniel Adi and Donga LGA, Nashuka DanMusa and that of Takum LGA, Shiban Tikari, all thanked the military for making their presence felt in their communities.

They noted that the sinking of the boreholes in addition to provisions of security, had gone a long way to demonstrate how much the military care for the people of the state even as they promised to cooperate with troops of the operation stationed in their areas.

Meanwhile, Force Commander of OPWS, Maj. Gen. Adeyemi Yekini warned people of the state to desist from harbouring criminal elements in their homes and cooperate with troops of OPWS by volunteering information on time so as to be able to raid bandits from their communities.