Taraba Government to Establish a Security Post in Chunku Community 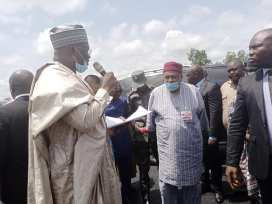 Taraba State Governor, Arc. Darius Dickson Ishaku has called on all those who fled their communities due to the crisis in Southern Taraba to return.

Governor Ishaku made the call in Chunku, a community previously co-habited by the Tiv and Jukun people but which was deserted in the wake of the crisis between them.

Ishaku was on Thursday in Chunku community to establish a security post to be manned jointly by the military and the police.

He said Chunku community is of strategic importance to peace in Southern Taraba in a significant way, adding that if there’s no peace in Chunku then there can’t be genuine peace between groups in the zone.

The event was yet another opportunity for Governor Ishaku to carry his message of peace to Tarabans.

He reminded the people that the crisis in the state had done untold damage to agriculture and the economy of the state as a whole and urged them to embrace peace and work together for the progress the state.

He promised to do much more to uplift the state in the area of infrastructural development if the people agree to live together in peace.

Earlier, Ishaku had inspected the Wukari-Tsokundi road being constructed by his administration and expressed satisfaction with the quality of work being done by the contractors.

He said the road is strategic to the economy of the state, particularly Wukari, Donga and Ibi Local government areas which will boost transportation of agricultural produce from the farm gates in the areas to markets everywhere in the country.

He attributed the delay in completing the project to the crisis in the area and apologised to the contractors for the damage done to some of their equipment during the crisis.

He promised to compensate the company for the damages.

BY Bala Dan Abu,Special Adviser to the Governor,(Media and Publicity).