WHO IS JUSTICE ADAMU ALIYU? 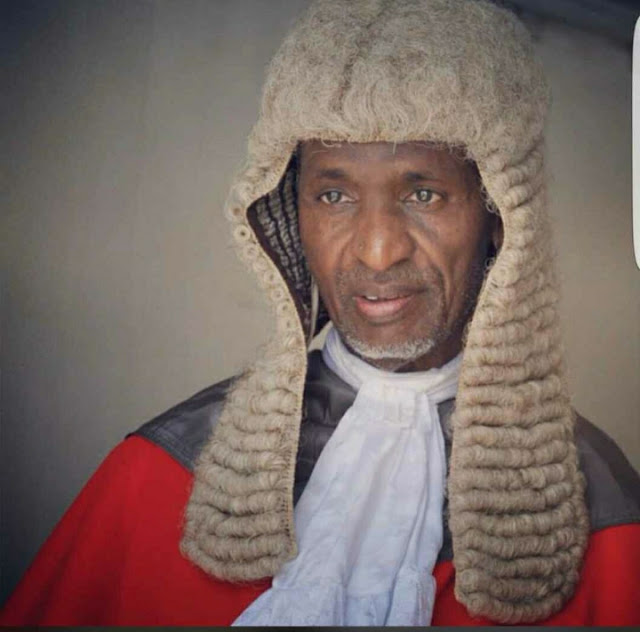 A  sad day it is for the Bar and the Bench in Taraba State as Justice Adamu Aliyu, the second Chief Judge to govern the affairs of the judiciary in the state answered the call of the Almighty yesterday at around 10:00pm at the Federal Medical Center, Jalingo, Taraba State.

Born on the 4th day of April, 1947 in Jalingo, the headquarters of Muri Emirate in the present day, Taraba State. He was a product of the Ahmadu Bello University from 1973 to 1976 after his diploma programme and upon graduating with flying colours, he subsequently attended the Nigerian Law School where he was called to the Bar.

Justice Adamu Aliyu's contributions to the state as well as the entire country cannot be quantified. He began his working career as a Clerical Assistant upon his diploma graduation and his two years of working as an Assistant Registrar saw him being posted to three different stations. He was initially at the Criminal Area Court Yola, shortly he was taken to the Civil Area Court, Yola and subsequently posted to Area Court, Gombe and in 1972, he was reposted to Upper Area Court, Yola. Upon graduation from degree program at the Ahmadu Bello University and following the creation of Gongola State, he was promoted to the rank of Higher Registrar on the 1st day of June, 1976. He left Nigerian Law School, Lagos still on service with Gongola State Government as a Higher Registrar till 1978 when he was appointed Magistrate II.

Justice Adamu Aliyu's journey to the Higher Bench began on the 9th day of April, 1990 when he was appointed a High Court Judge in the defunct Gongola State and upon the creation of Taraba State by President Ibrahim Badamasi Babangida, on the 27th August, 1991 with its headquarters in Jalingo, Justice Adamu Aliyu became one of the pioneer Judges and following the elevation of Justice Mahmud Mohammed to the Court of Appeal, he was appointed Taraba State acting Chief Judge on the 5th April, 1993 and later confirmed the substantive Chief Judge, a position he held for 18years before his retirement in 2012.

Justice Adamu Aliyu no doubt contributed heavily to making the judiciary what it is today. He built the High Court complex that we all sit comfortably in today. He, it was that ensured Judges welfare is given ultimate priority. He made it a priority that mobility of judges should not be taken for granted by liasing with the Governor of the state in providing the cars some of them still use till date. He had a good working relationship with friend, Pharmacist Danbaba Danfulani Suntai, the late Governor of Taraba State, yet not compromising his stands with respect to the sanctity of the independence of the judiciary as funds were provided for the many lower courts he built that were later upgraded and improved upon by his successor. The entire Bar loves him deeply, hence the Bar Center built by the Ibrahim Effiong administration of the NBA, Jalingo branch was named after him as Justice Adamu Aliyu Bar Center.

For us Taraba Lawyers, we once again reiterate that we shall surely miss a jurist per excellence, a father, a mentor and teacher with piety and humility uncommon in this generation. Our ernest prayer is that Allah(SWT) grant him jannatul firdausi. Sleep well Your Lordship.