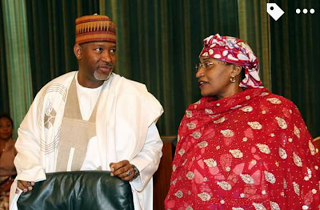 The Minister of Women Affairs, Aisha Alhassan, on Wednesday, attended a meeting of the Federal Executive Council on crutches.
Dressed in a flowing gown, Alhassan was helped into the venue of the meeting inside the Presidential Villa, Abuja, by her security aide.
At the end of the meeting, presided over by President Muhammadu Buhari, the minister also joined the Minister of Agriculture and Natural Resources, Chief Audu Ogbeh; and the Special Adviser to the President on Media and Publicity, Mr. Femi Adesina, to brief journalists on the outcome. 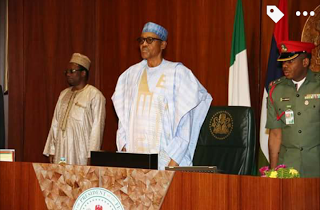 Immediately she took her seat, her security aide collected the crutches from her.
At the end of the briefing, the female security operative quickly returned the crutches to the minister to enable her to leave the venue.
Our correspondent learnt that the minister had undergone a knee surgery in the United States.
The Secretary to the Government of the Federation, Mr. Babachir Lawal, had, during the FEC's meeting on June 8, confirmed that Buhari and three of his ministers were indisposed at the time.
Lawal disclosed this while saying the opening prayer at the beginning of the meeting, which was presided over by Vice-President Yemi Osinbajo.
Buhari was at the time in London on a 10-day vacation during which he saw Ear, Nose and Throat doctors in relation to what the Presidency described as his "persistent ear infection."
Lawal had disclosed that Alhassan "is recuperating in the US after a surgery."
He also prayed for the Minister of Education, Adamu Adamu, who he said "is down with back pain."
Shortly after he concluded his prayer, the SGF was reminded that he did not mention the Minister of State for Environment, Ibrahim Jibril.
Lawal quickly added Jibril's name to his list of sick cabinet members.
He, however, did not disclose the nature of Jibril's sickness.