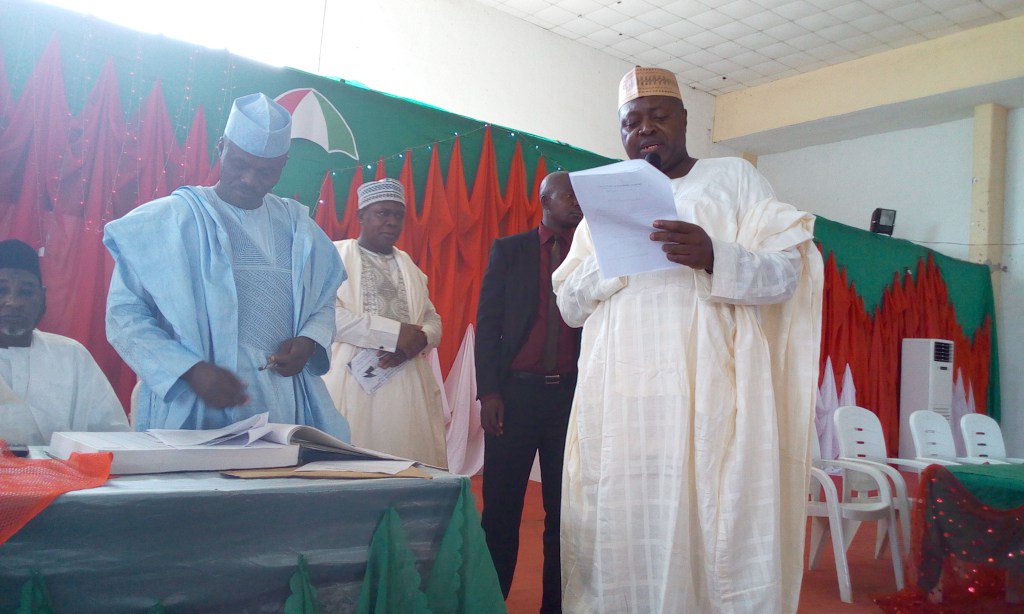 Taraba State Governor, Arc. Darius Dickson Ishaku has commended the Peoples Democratic Party, PDP members in the state for their commitment, dedication, doggedness and resilience during ?the 2015 general elections that brought onboard the present administration in the state.

Governor Darius Ishaku made the commendation during the swearing-in ceremony of the newly elected officials of Peoples Democratic Party, Taraba State chapter at the Jolly Nyame Stadium, stressing that PDP in the state stood firm to ensure that the party emerges victorious at all levels.
Represented by his Deputy Governor, Haruna Manu who emphasized the need for collective unity, primarily to re-strategise to make the party wax much stronger in preparatory to the 2019 general elections
He asserted that the new slogan of the party, “Change the Change,” should be a point of meditation of every faithful and loyal member of the PDP.
Haruna Manu maintained that the present administration is determined to collaborate with the new set of Executives to take PDP in the state to the next level by creating a level playing ground for every member of the party.
The Deputy Governor advised the new Executives to fashion out ways that will help bring back the grieving members of the party as well as encourage those that were hitherto not from the PDP to come and join the party. He added that motivating others to join the party will only be possible if there are mutual love and brotherliness among the party members.
Haruna Manu then used the opportunity to tasks the newly sworn in Executives to key into the Rescue Mission of the state Government by supporting all its policies and programs for it to succeed and equally call on the general public to join hands with the present Government to deliver on its campaign promises.
Speaking shortly after being sworn in as the Peoples Democratic Party Chairman for the second time, Hon. Victor Bala Kona said time for proper stocking with the intent of working towards correcting some of the mistakes encountered during the last elections.
Bala Kona said time for proper stocking with the intent of working towards correcting some of the mistakes encountered during the last elections.
Hon. Victor Bala Kona maintained that he is going to run an open door policy where people with ideas that will help move the party forward are welcome and used the opportunity to challenge other Members that have left the party to return and assist in reorganizing the party for the better.
He reiterated his commitment towards working assiduously to carry all members asserting that the newly found slogan calls for collective unity of all members so as to free the people and to firmly hold on to the state as a PDP state and to also win back the country in 2019.
Victor Bala Kona boldly told the crowd that came to witness the inauguration that Tarabans did not make a mistake by electing Darius Ishaku as a Governor going by what he has done, what he is doing and what he will continue to do for the state to move forward and asserted that everyone knows that the Rescue Mission is truly and amazingly working.
The party Chairman maintained that, the era of double standard will longer be accepted by the party and posited that the present administration is determined to carry all Tarabans along devoid of ethnic or religious sentiments and encouraged all to join hands with the present Governor in Rescuing the state and added, Taraba belongs to all Tarabans, and there should be a collective will from all well meaning Tarabans to accord the Rescue Mission the desired support so that it would be able to reach out to all even at the Grassroots.
Earlier in his speech, the North East Zonal Chairman, Ambassador Emmanuel Njiwah thanked members of the PDP family for collectively electing Hon. Victor Bala Kona for the second time and pointed out that Victor Bala Kona is a rare breed who made enormous sacrifices that contributed to the successes recorded by the party in the last general elections.
Amb. Emmanuel Njiwah stated that the collective decision by Tarabans in electing Arc. Darius Dickson Ishaku was the wisest and pointed out that, Darius Ishaku is a blessing to the country. He disclosed that the only two PDP states in the North East are the only states that are prompt and consistent in the payment of salary as well embarking on projects that are of optimum benefit to the people.
He maintained that what PDP desires in this moment of hardship is to reinvigorate with a view to selflessly supporting the party to take over the affairs the affairs of the country and affirmed that PDP is the only solution to the current challenges faced in the country.
The high point of the event was the taking of the oath of office by newly elected Executives presided over by Barr. Nuru Isa Bambur beginning with the state PDP Chairman, Hon. Victor Bala Kona, followed by other members of the newly elected Executives cutting across the three geo-political zones of the State as well as the presentations of certificates.