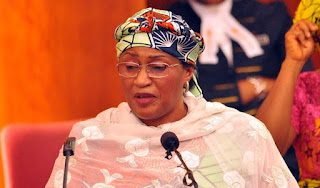 The Minister of Women Affairs and Social Development, Sen. Aisha Alhassan, on Sunday said the Federal Government had released N150 billion for women entrepreneurship development in Nigeria.
Alhassan, who is on an official visit to Taraba, told newsmen in Jalingo that the money was part of the N500 billion Social Protection Fund.

According to her, the fund has been deposited at the Bank of Industry (BoI) for women entrepreneurs to access.

She said out of the fund, N1.6 billion was earmarked for micro finance scheme for women.

Alhassan also revealed that the National Gender Policy was currently under review to enhance inclusiveness and participation of women in all spheres of government.

On violence against children, the minister said 24 out of the 36 states of the federation had domesticated the Child Rights Act.

“The Child Rights Act is a document that sets out the rights and responsibilities of the child in Nigeria and provides for a system of child protection and administration.

“ 24 states have so far domesticated the Act. I hope the remaining states will do that soon.

“ I planned to visit the Taraba House of Assembly to sensitise them on the need to domesticate the Act but ,unfortunately, they are on recess.

“ However, I am calling on the lawmakers to domesticate the Act in the state for the good of our children and grandchildren.

The News Agency of Nigeria (NAN) reports that Alhassan is in Taraba to highlight the achievement of President Buhari’s administration in the last one year and to also donate relief materials to Internally Displaced Persons ( IDPs) across the state .(NAN )
‎