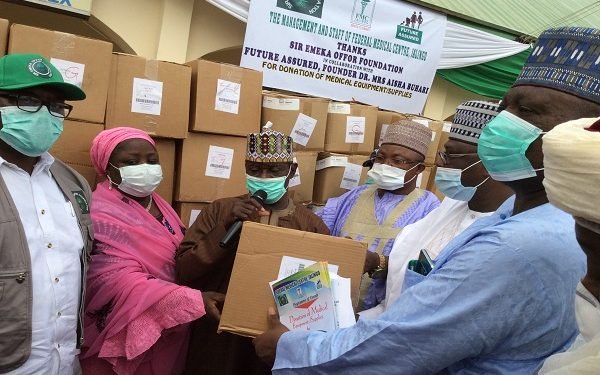 The President’s wife Aisha Buhari and Emeka Offor – a philanthropist, on Thursday jointly donated medical equipment and supplies to the Federal Medical Centre (FMC), Jalingo, Taraba State.
Offor’s Chief of Staff, Assistant Inspector General of Police Chris Okey Ezike (rtd) said the equipment are worth $380,000.
The donation came through Offor’s NGO – Sir Emeka Offor Foundation (SEOF) in collaboration with the president’s wife’s Foundation – The Future Assured.
Ezike said the FMC, Taraba is a beneficiary because the president’s wife nominated it.
A former member of Taraba State House of Assembly Kabiru Dodo, who represented the First Lady, said Nigeria must be healthy, because a healthy nation is a wealthy nation.
Dodo said the collaboration between Future Assured and Sir Emeka Offor Foundation was based on shared vision and mission to serve humanity.
Secretary to the State Government (SSG) Anthony Jellason, received the equipment on behalf of Governor Darius Ishaku.
The SSG said: “The equipment and supplies are so many that I don’t know how enough to thank Emeka Offor and the president’s wife.
“They gave us plenty equipment and did not ask us to go and collect. They brought them to Jalingo – the state capital. These huge gifts will remain indelible in the minds of all Tarabans.
FMC Medical Director Dr. Aisha Shehu Adamu, said the equipment will enable the medical centre to set up an Intensive Care Unit, which hitherto was not in the hospital.