We are Participating in Taraba LG Election- APGA, AA Candidates 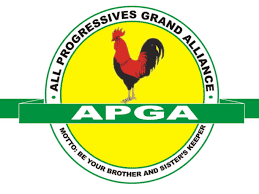 Candidates of the All Progressive Grand Alliance APGA and the Action Alliance AA for the Tuesday June 30 local government election in Taraba State said they are ready to participate victoriously in the exercise.
The candidates spoke at an event  organized by the Eyes on Democracy Nigeria EDON Taraba State Chapter and all Civil Society Situation Room Taraba State ahead of the forthcoming local government election in Jalingo.
APGA Chairmanship Candidate in Jalingo Local Government, Hon Benjamin Biko who spoke on behalf of his party said he's participating in the election because of he's confident of winning the poll.
"Me and my supporters are confident of victory, Jalingo people are already to vote for APGA on Saturday," Benjamin Biko said.
Also a councilorship for Sintali Ward in Jalingo Local Government under the Action Alliance AA, Bashir Bello said his plans is to represent his people at the local government and attract government attention to the area.
"Sintali Ward is one of the biggest ward in Jalingo but the area has been poor represented in the past, I have assured my people of adequate and quality representation when elected.
Our party is very strong here in Sintali and our candidate is very popular infact our candidate enjoys support of the people and we are confident of victory on Saturday. We are calling on electorates to vote for Action Alliance AA in every areas we have field candidates."
Chairman of the Action Alliance in Taraba State Engr. Kamaluddeen Soje said his party is confident of victory in a free and fair poll.
He said about 16 political parties are participating in the local government election urging the people not to see it as an fairs of the ruling party.
Also Chairman EDON  Taraba State Chapter Muktar Madaki called on the Taraba State Independent Electoral Commission TSIEC to ensure the Saturday local government election is credible and transparent.
Madaki said  the contest with about 16 political parties has given the people the power to decide who will govern them at the grassroot level.
He stressed that the Local Government Election is very important because it avails the people the opportunity to choose their leaders at the grassroot level. The local government system of Government is the closest to the people and it's very important for everyone to be concern about it.
Coordinator of the Civil Society Situation Room Taraba State for the local government election and EDON Acting Secretary, Comrade Mansur Munkaila Jirgi  however expressed satisfaction with the preparation of TSIEC and participating political parties in the election.
“it's behooves on the people to troop out in large numbers to exercise their franchise as responsible citizens and residents, We call on TSIEC to ensure the election is credible, free and fair.  Every votes must count, we also call on the security agencies to be civil and operate within the ambit of their engagement in regarding to electoral matters."
He said a situation room for civil societies and observers will be opened in a location undisclosed for security reasons, “we are working with all observers, security agencies, voters, participating political parties and their candidates to ensure the election is transparent and credible. Our assessment and report on the conduct election will be made public. it's very disturbing that a strong political party like the APC was caught unaware. However, they are other Political Parties participating in the process and we call on the people to come out to vote their choice in a peaceful and orderly manner.”
For