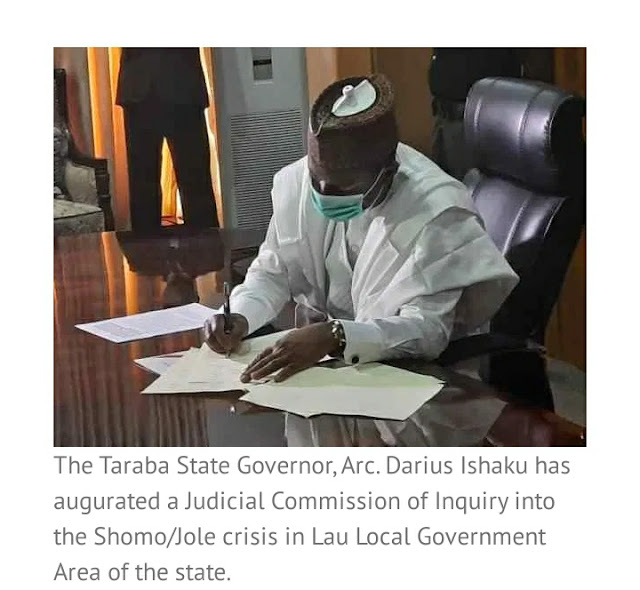 The Taraba State Governor, Arc. Darius Ishaku has augurated a Judicial Commission of Inquiry into the Shomo/Jole crisis in Lau Local Government Area of the state.

Inaugurating the commission in Jalingo, Governor Ishaku represented by his deputy Engr. Haruna Manu said the move was to curtail once and for all, the continuous wanton destruction of property and bloodletting in what has now become an annual ritual.

The Governor regretted that a number of attempts have been made by previous administrations to genuinely seek permanent solutions to the claims and counter claims over the ownership of some ancestral fishing ponds in Lau Local Government Area.

“I am today, on behalf of the Executive Governor, Arc. Darius Dickson Ishaku, inaugurating this Judicial Commission Enquiry, made up of Statesmen of impeccable character, to proffer permanent, workable and acceptable resolution to this age long fratricidal disagreement that seems to defy logical answers.

“We are however, not discouraged by the lack of progress in earlier attempts, that is why this high power panel will be given all the necessary tools and support to perform the important responsibility of resolving this avoidable, yet protracted bloodbath, among the two communities that have lived alongside each other for ages.

“This Administration frowns and condemns in very strong terms, the senseless and needless resort to the use of arms, at the slightest provocation by individuals, groups and communities, whereas, there exists ample mechanisms for amicable dispute resolution and settlement of disagreements.”


Governor Ishaku warned that henceforth, his administration will not hesitate to wield the big stick, by descending heavily on those who fan the embers of discord under whatever guise.

He assured that there shall not be any sacred cow, as anyone that is found wanting or culpable will be made to face the full wrath of the law.
The Governor also announced that as an interim measure, government has banned all fishing and other activities in and around the ponds that are in contention until further notice, warning that any individual or group that violates the order will be dealt with.

The Judicial Commission of Enquiry which has Hon. Justice Silas Haruna as Chairman with representatives from the security agencies and the traditional institution was mandated to among other things to identify the remote and immediate causes of the crisis and uncover those involved in the mastermind of the crisis.

“Identify the communities affected and the impact of damage caused including lives and property.


“Identify the role of Traditional institutions, Community leaders, religious and Political leaders involved in the crisis and make recommendations on how to forestall further crisis in the area.”