Despite Curfew, Looting Of Warehouses Continues In Taraba 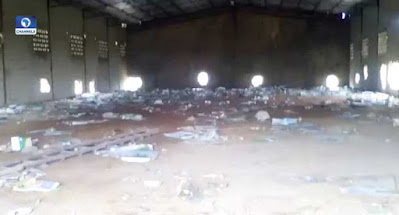 Hoodlums in their number have continued to loot warehouses belonging to both private and government in Taraba State.

Channels Television learnt the hoodlums no longer go for food items alone, but anything they can cart away with.

On a visit to one of the scenes on Sunday in Jalingo, the state capital, looting of warehouses was still ongoing without hindrances by security agencies even as the 24-hour curfew imposed by the government persists.

A Non-Governmental Organisation, Hope Afresh Foundation, said to be owned by the wife of Governor Darius Ishaku, Anna was not also spared in the mayhem.

Broken doors, windows, empty stores, vandalized vehicles, and the littered environment is what has characterized the looting of warehouses between Saturday and Sunday.

Places affected include the veterinary clinic opposite CAN Secretariat, the State Transport Cooperation Store, Agricultural Development Programme, Agro product warehouses among several others.

For instance, at the State Transport Cooperation, the hoodlums looted all the tricycles meant for empowerment programmes, offices, destroyed vehicles as well as made away with passengers goods.

Reacting to the development, the General Manager of the Transportation Company, Ahmed Ishaku described their action as worrisome and unfortunate.

“In fact in the administrative offices, everything was carted away,” Ishaku told Channels Television, adding that “we are yet to assess the cost of the damages done to our blocks.”

“I received a phone call from my company secretary that hoodlums have come to vandalize our store.

“We borrowed the store out to SEMA and NEMA and have no business with the relief materials in there.”

Also on a visit to Hope Afresh Foundation, there were bloodstains all over, even the water cistern was said to have been carted away.

Though the wife of the Governor is not on the ground as at the time we visited, her aides reacted to the level of destruction.

One of them and the assistant head of ICT, Gambo George who was visibly in tears, described the incident as wickedness.

“This is nothing short of wickedness because there has never been a time any form of palliative has been brought to this facility, but our office is vandalized,” George said.

While lamenting the extent of damage done, he revealed that the facility was created to uplift the poor and vulnerable in the state.

“We experienced a huge loss and this facility was put in place to bring skills acquisition to people to help build them in their entrepreneurial drive,” he noted.

Though millions of naira have been lost to this unfortunate situation, the government is yet to speak on the next step it will take in tackling the unrest.

Meanwhile, the State Police command is yet issue any statement as to measures so far taken to curtail breakdown of law and order as well as the total number of persons feared killed in the incident.