Ishaku warns against use of arms to resolve disputes 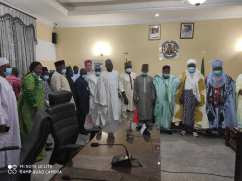 Taraba State Governor, Arc. Darius Dickson Ishaku has warned against the resort to the use of arms as a means of resolving communal crises.

Governor Ishaku gave the warming when he received the report of the Commission of Enquiry that probed the crisis between Shomo and Jole communities in Lau Local Government Council Area over the ownership of a fish pond.

The conflict over the pond has persisted over many years resulting to the death of many people and destruction of houses and agricultural products.

Governor Ishaku regretted that the solution to the crisis had eluded many governments in the state for long, noting the assignment was also not an easy task for the Commission of Inquiry.

He however assured that his administration would resolvee the conflict.

He thanked the members of the Commission of Inquiry led by Justice Silas Haruna for addressing the issues involved very comprehensively.

Earlier, Justice Haruna had told me Governor that his commission found out that the ownership of the fish pond was not the only cause of the crisis.

He said the Jole people accused the Shomo people of referring to them as outcasts.

He said the latest of the attacks on Shomu by the Jole people was provoked by such negative remarks.