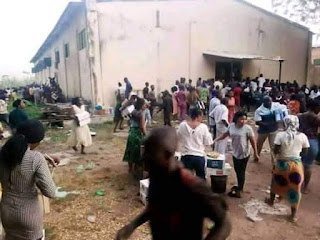 The angry residents had on Saturday broke open a warehouse containing COVID-19 palliatives donated by the Coalition Against COVID-19 (CACOVID), the Northeast Development Commission (NEDC), and the Victims Support Funds (VSF).

The warehouses located at the Veterinary Clinic opposite the secretariat of the Christian Association of Nigeria (CAN) in Jalingo, the state capital also houses grains of maize and soybeans belonging to AFEX Commodities Exchange.

Items belonging to several rice investors and farmers were looted during the mayhem.

Despite the quick arrival of security operatives at the scene, they watched helplessly as residents carted away items kept at the warehouse to cushion the effect of the COVID-19 pandemic in the state.

Some of the residents said that they took the action knowing that it was the current trend in the country, while blaming government officials for hoarding the food items despite glaring hunger in the state.

Our reporter saw thousands of people including women and children carting away assorted items from the warehouse.

Some of the looters came with Tricycles, popularly known as Keke Napep, vans, and other vehicles to load and loaded bags of Rice,Maize, Soyabean, and other items from the warehouse.

Some the looters interviewed said the items stored in the warehouse was purchased by the public fund and the items belong to the people.

” We are taking what belongs to us, the politicians are wicked people for keeping the items when people are hungry” the woman said.

Meanwhile the Taraba State Government has imposed a dusk to dawn curfew on Jalingo.

The state deputy Governor Engr Haruna Manu in a state broadcast on Saturday night said the curfew follows certain bad happenings in the state, "government has decided to impose a curfew on Jalingo, the state capital to forestall further breakdown of law and order. The curfew will run from 11:00pm on Saturday to 8am on Monday as government will thereafter review the situation."

Manu said "at about 5pm in the evening of today, Saturday, the 24th day of October 2020, vandals forced their way into government warehouses and looted essential commodities meant for distribution as palliatives in the state.

He noted that troublemakers are continuing to lay siege on the streets of the state capital which informed government’s decision to impose the 24 hour curfew to stop the situation from degenerating into mayhem.

"As a responsible government this step has become necessary to protect lives and properties of our dear people. The security agencies have been directed to be extra vigilant and stop trouble makers from seizing the opportunity to cause further destructions. This, they must do within the confines of the law and by protecting the human rights of our people."