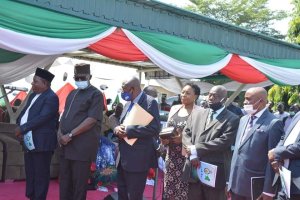 The Executive Governor of Taraba state, Arc. Darius Dickson Ishaku has constituted a Judicial Panel of Inquiry and Restitution for victims of Police Brutality and other security agencies.

The event which took place at the premises of Government House, Jalingo has Justice Christopher D. Awubra as the Chairman and the following as members of the panel;

The Panel also has the following Terms of Reference: