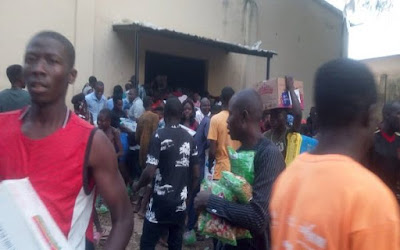 Hoodlums, in their large numbers on Sunday night invaded Wukari, headquarters of Wukari local government in Taraba, carting away valuables at the Government Lodge, Council Secretariat and the ministry of Agriculture.

The Vice-Chairman of the local government, Mr. Tijani Saleh told The Nation the incident started around 8: 00 pm when the hoodlums who had converged at the Ibi roundabout began to sing different tunes of war songs and later burgled into the local government Ministry of Agriculture, which they looted.

He added the hoodlums thereafter moved to the Government Lodge and the local government Secretariat, carting away valuables, including office furniture.
According to the Vice- Chairman, private shops and businesses centres were also freely looted by the hoodlums.

He said: “In order to forestall the breakdown of law and order, the council Chairman, Mr. Adigrace quickly soughted permission from the Governor, Dickson Ishaku and placed a 24 hour curfew on Wukari town”.

Saleh confirmed that normalcy has since been restored to Wukari.