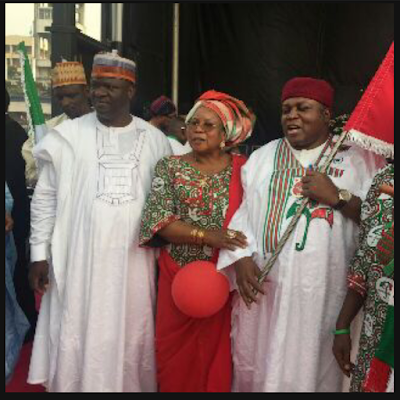 The Governor of Taraba state Arch. Darius Dickson Ishaku yesterday said that what killed Peoples Democratic Party PDP at the 2015 general election was arrogance and imposition of wrong candidates at the general elections.
Ishaku stated this at government house Jalingo Taraba state capital while hosting the North East zonal officials of PDP, who were in his office during a condolence visits on the death of Bala Ndakoro one of the North East executive members of PDP who died in Taraba state.
Ishaku, responding to a remark earlier made by the PDP North East zonal vice chairman Sen. Muhamed Lawan, said that until the party accept to filled candidates who have the interest of the masses at heart it would be difficult for PDP to win the sympathy of Nigerians.
Ishaku said PDP after ruling Nigeria for 16 years became too arrogant that some of its leaders forgot about the well being of the citizenry and became power drunk.
He said the party leaders at the national headquarters were handpicking unpopular candidates against the wish of the electorates without been mindful of the recent negative result at the general elections that consumed over 80 per cent of the party’s popularity.
“Am a victim of what I just said, the national headquarters kept opposing me even though I was a popular candidate in my state, some leaders think they can pick who ever they wanted and at a point I left Abuja and came to stay in Taraba I knew they were working against the wish of my people”
“Those who wanted to impose a candidate insisted that even if I contest I will fail but here in the state I was the most popular candidate. I was bastardized by some crowns who put themselves as PDP leaders without consulting the people at the grass root who are the electorates”
“Some of us saw it coming because the PDP leaders became arrogant after 16 years in power instead of consolidating on the gains of democracy the party leaders choose to make selfish decisions that was not in the best interest of Nigerians, I suffered the same thing and it was a bad experience” Ishaku stated.
“We must stand to defend the party against those who are in the party to make money, politics is about services to the people not avenue for making money, those who want to serve should be given a chance while those who are after money should be shown their way out of the party”
“My less than 100 days in office as a governor of Taraba I have been able to stabilize supply of acute water in the state capital and other areas, I have commissioned Mambila Mini Hydro power and there has been light over there for 24 hours I have made my efforts and the people in Jalingo are enjoying constant power supply, that is what the people want”
“Because of the power project I commissioned at Mambila the Kakara High Land Tea is going to declare profits this month, something that has not been done for long”
Ishaku further stated that unless the party changes it’s constitution to favor all Nigerians who are willing to join politics if not those at the helms of the party would continue to give undue maneuver against the wish of the masses.