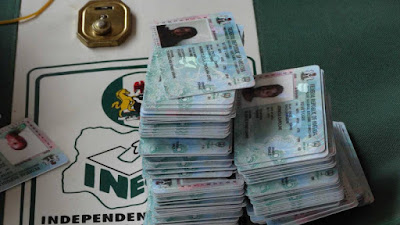 The Taraba State governor, Darius Ishaku, yesterday called on the people of the state to ensure that they collect their Permanent Voter Cards (PVCs) to enable them vote in the forthcoming general elections.
Ishaku made the appeal at St. Justina Catholic Church Mayo-Dassa, Jalingo, during the launch of a book titled: “The Bible at a Glance’’ written by the Parish Priest, Rev. Fr. James Vontih.
The governor said that he was worried about the report from the Independent National Electoral Commission (INEC) that over 135,000 PVCs are yet to be collected by their owners.
Ishaku, who was represented by the chaplain of the Government House Chapel, Rev. Sheka Bambur, urged the people to, as a matter of importance, hasten up in collecting their PVCs.
He said that his administration was determined to rescue the people from the shackles of unemployment, poverty and insecurity.

Earlier, the author of the book, Fr. Vontih said that the public presentation of the book was his initiative to support the building of a befitting house of worship for God.
Vontih said that the book was also part of his efforts to support the Catholic community of St. Justina Mayo-Dassa who were temporarily worshipping in a school hall of St. Justina Nursery and Primary School.
Dr Williams Benedict of the College of Agriculture, Jalingo, who reviewed the book, commended the priest for the good work.

Benedict described the launch of the book as timely.
“At a time many people are turning to iPad and smart phones to read the Bible and ignoring the hard copy of the Bible, the book is timely as it provides executive summary of what the Bible contains.
“The book gives a deep interpretation of the Bible and will help shape and enrich the understanding of many Christians who will read it,” he said.