Hunters offer to fight kidnappings, other crime in Taraba 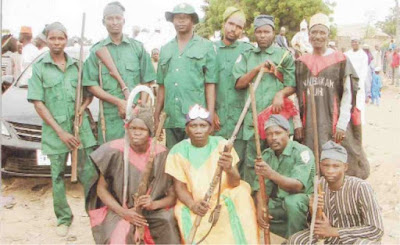 Hunters association have offered itself to help join forces in the fight against kidnappings and other forms of crimes in Taraba State and parts of the North- East.
The secretary of Hunters association Taraba State branch, Mallam Usman Mamadu told North East Trust in an interview that the association is ready to assist security agents in their effort to reduce the rate of crimes especially kidnapping and armed robbery.
He explained that the association has over 15000 members across the 16 local government areas of the state and has been assisting in curbing activities of kidnappers, cattle rustling and armed robbery in their localities.
The secretary stated that over the years members of the association have assisted security agents in Taraba and in other states in the North East in the fight against insurgents and other criminal elements.
MallamUsman Mamadu said members of the association had participated in fighting kidnappers in Bali, Gassol, Gashaka and Donga local government areas and also arrested many kidnappers and rustlers and handed them over to security agents.
He said members of the association are   professional hunters that inherited the profession from their fore fathers and still maintain the culture.
“Hunting is part of African culture and is passed from generation to generation even though the system has been modernized now,” he said.
‘’We are familiar with all forests and all the terrain in our locality and therefore a hunter that inherited the system has all the skills that make a good hunter’’ Usman Mamadu said
He stated that the association has a code of conduct for all the member as well as the mandatory annual oath taking, ‘ Salala’   which guides the practice.
The secretary said any member that abuses his oath is bound to face serious consequences apart from expulsion from the association.
He said apart from inheritance all members must register with the association pointing out that it is a crime for a member to deviate from the rules and regulation of the association.
The secretary said the association is   non-religious   or tribal   as members from the religious divide and tribes are all members and working together to sustain the culture and tradition of their fore fathers.
“The sole association aim is  to sustain the culture of traditional hunting which is a strong profession among Africans, most especially in Northern Nigeria decades back “ he said
He said with the various form of crimes confronting the society, hunters could be used to assist security agents to secure their various communities.
He said in states like Adamawa, Bauchi, Yobe , Borno and Adamawa members of the association are assisted with vehicles and stipends   to participate in crime prevention adding that hunters could be used as vital tools to police their communities by monitoring movement of strange persons in the bush and the forest.
“Our members are always in the bush and forest hunting and they usually come across persons strange to the environment and therefore if they are working closely with security agents they can alert the security of any suspicious movement,” he said.
The secretary therefore called on the Taraba State government to support the association with vehicles and also give the desired recognition to enable them assist in crime prevention in the state.