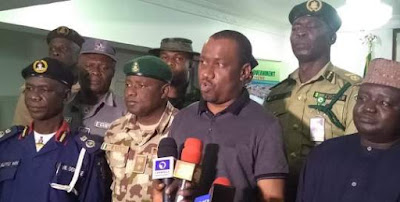 A special security meeting called by His Excellency, Governor Darius Dickson Ishaku held for several hours at Government House, Jalingo, Taraba State.
The meeting which was attended by representatives of all the security agencies in the state took far-reaching decisions on how to end the Tiv/Jukun crisis, kidnappings and armed robbery in the state.
The resolutions at the meeting were read out at a special media briefing by the Deputy Governor of Taraba State, Engr. Haruna Manu shortly after the meeting rose.
The meeting decided to set up a special task force made up of 15 members each from both the Jukun and Tiv sides to find a lasting solution to the crisis between them.
Another committee to address kidnappings and other related crimes will also be set up to be made up of critical stakeholders in the security agencies.
The meeting is a follow up to the one held recently in Abuja on the Tiv/Jukun crisis where it was agreed that the crisis being a Taraba State affair should be left to the Governor of Taraba State to handle.
The meeting, according to the Deputy Governor, also resolved that the boundary adjustment commissions from both Taraba and Benue states would liaise with the Federal Boundary Commission in order to quicken the process of demarcating the boundary between the two states.
The meeting believes that a proper boundary demarcation would greatly help in the resolution of the crisis between the Tiv and the Jukun.