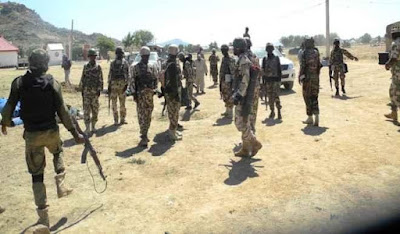 Soldiers have been deployed to Wukari local government area of Taraba State to clear roads which were blocked by militia and restore peace in the area. Investigation by Daily Trust revealed that many soldiers sent to the area have cleared some roads blocked by the militia and traffic has resumed on the roads.
The road under patrol by soldiers on a 24-hour basis include; Wukari-Takum, Rafin-kada-Donga and Wukari-Kente road.

Wukari-Joita road is also under military surveillance and patrol and motorists are now passing without attacks by militia.

The soldiers, it was gathered, were working on the instructions of Army headquarters to restore peace in all areas affected by Tiv/Jukun crisis and also clear all roads where militia were attacking motorists.

Daily Trust gathered that several persons were killed in the last few months along the roads in the crisis areas by suspected militia. The commander, operation Whirl stroke, Major General Adeyemi Yekini, confirmed deployment of the special Force to restore peace in all areas affected by the Tiv /Jukun crisis in Taraba state.