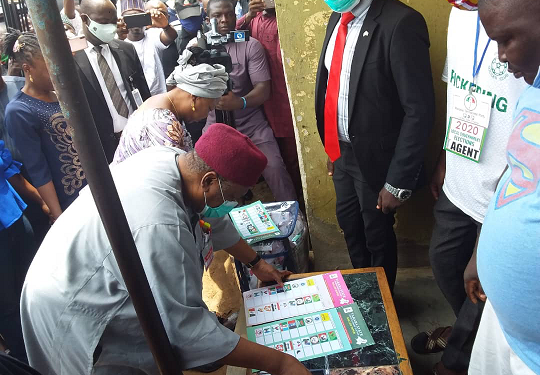 However, Bala, who voted in Bakin Dutse, expressed satisfaction that the election was peacefully conducted.

“Taraba is an agrarian State and we are in a rainy season, so most of the people went to the farm instead of the polling units.
“Even those who turned out to cast their ballots did it in a rush and headed to their farms. Even me, I am coming late, and now that I have voted, I am leaving for other places,” he said.
Governor Darius Ishaku also expressed satisfaction with the conduct of the council election. The governor, who cast his vote in Sarkin Jukun unit, Takum, said reports reaching him from across the State indicated that the conduct of the election was peaceful.

“The election in Southern Taraba is also peaceful. Credit goes to the State Independent Electoral Commission for organising a free, fair and peaceful election.”
It was gathered that the boycott of the election by the main opposition All Progressives Congress (APC) also attributed to the polls low turnout. Chairman of the Taraba State Independent Electoral Commission (TSIEC), Dr. Philip Duwe, told The Nation that the PDP and 16 other political parties participated in the election.
The APC Chairman, Ibrahim Tukur Elsudi, said the APC opted out of the election because the date (June 30) slated for the election was too short for the party to do campaign, conduct primaries and field candidates.
Ishaku disclosed that the APC, despite boycotting the election, was signatory to the June 30, 2020 date for the election and wondered why it could not participate in the election.