You should work for peace in Taraba- Gov Ishaku charges Journalists 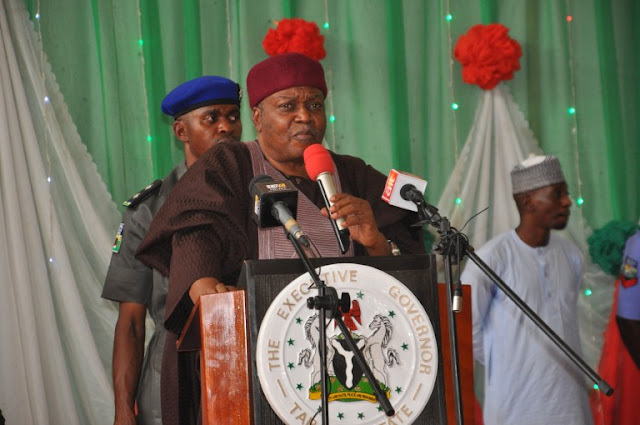 The Taraba state governor Darius Ishaku on Friday urged journalists in the state to compliment government’s efforts and  work towards achieving lasting peace in the state through objective and professional reportage and promotion of stories that foster peace rather than inciting the public.

Mr Bala Dan Abu, the SSA media to the governor made the call on Friday when the leadership of the correspondent’s Chapel of Nigerian Union of Journalists NUJ in the state led by Alhaji Sadiq Adamu paid the governor’s media team a courtesy call at the government House Jalingo.


Abu who noted that the journalists are a very critical stakeholder towards the achievement of government objectives said that efforts by the state government would not be fruitful if the media does not key in and avoid inciting and sensational reportage.

He congratulated the new leadership and and express confidence that the caliber of members that now constitute the leadership was capable of delivering on their mandate and assured that the government would create the enabling environment for the journalist to do their work effectively.

Earlier, the Chairman of the Chapel Alhaji Sadiq Adamu assured the media team that his team would work in the overall interest of the state without compromising the welfare of the members.


Adamu noted that as professionals, the members were bound to be critical of the government when need be but this should not be seeing as antagonism.
“Today, I am here with the newly elected executive of the correspondent’s chapel first of all on a familiarization visit and to assure you that we would want your collaboration to enable us do our work well. We are aware of the security challenges in the state and we need the government to come in when we have to work in volatile areas.
” As media handlers for the government, we know you will always want only positive reports. However, as professionals, we are bound to be critical of the government at some pints. This should not be seeing as antagonism. It is part of our work. We will ensure that our members maintain the highest ethical standards at all times” Adamu said.
Saturday Sun recall that the Chapel election held last Saturday led to the election of Alhaji Sadiq Adamu of the NAN as chairman and Sylvanus Viashima of The Sun as Financial Secretary among other officials.