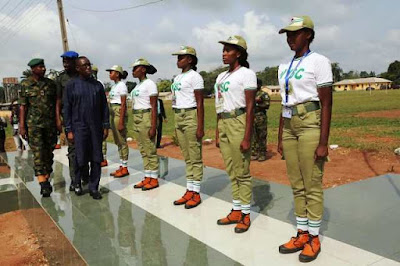 Some serving and ex-corps members in the National Youth Service Corps (NYSC) have lamented the deplorable conditions in their orientation camps, throwing up issues of health and environmental hazards to the public. While some states have improved facilities, majority of others are struggling to sustain the yearly inflow of graduates into the scheme. AGBO-PAUL AUGUSTINE And STELLAMARIES AMUWA (Abuja) write on an ideal NYSC orientation camp.

“I didn’t know Nigeria well until I travelled to Taraba State for my National Youth Service Corps (NYSC) programme. I had fantasised a lot for the three-week camp because I had heard a lot of fun stories about the orientation camp- the fun, thrills, pageantry and opportunity to meet other graduates from different institutions across the nation and abroad.

“I went to a private university where students are a little pampered with everything. Although my parents are not too rich, we were doing fine. The reality of life outside my comfort zone dawned on me the day I arrived Taraba State NYSC Orientation Camp Sibre, in Jalingo, Taraba State.

“It was at the camp I learnt how to ease myself in a bowl and use my hands to throw it over the fence because the toilets were so terrible I still feel sick anytime I recall my days at the camp.

“While the camp appeared neat, the sanitary condition at the lavatory was really appalling mainly from poor maintenance and the attitude of some of our colleagues,” said Faith, a serving corps member who wants her surname protected.

Continuing, Faith said, “I was shocked to see my fellow corps members excreting in bowls, buckets; I had goose pumps all over me. I couldn’t just do it, I have never excreted in a bucket before and I was really pressed. My friends then prevailed on me that it’s the reality in Nigeria and that its part of the experience of being a corper.”

After a week of struggling with the condition in the Sibre Camp, Faith adjusted to a life of ‘Short Put’, a term used to describe the use of bowl, buckets and polythene bags as toilets. She tackled the challenges as they confronted her by learning from fellow mates as she went through the orientation period.

“The Ondo camp is clean, but trust we ladies, hygiene was a problem forcing most of us to go the ‘Short Put’ way of excreting in bowls and buckets and sometimes in polythene bags and emptying it across the fence. Some just dumped it near the hostel. Electricity was our challenge then,” she said.

The Osun State camp at Ede, according to Rhoda Michael, an ex-corps member, has similar challenge of appalling toilets, which forces many corpers to seek alternative ways of easing themselves.

“When we were there, the camp was comfortable because we were less than 1,000 posted to the state. But when I went to the camp recently, I saw massive crowd of corpers, with some sleeping on the floors, as there were no bed spaces for them. I only wonder how the sanitary conditions in the camp would be,” she added.

The situation at the FCT camp located at Kubwa in Bwari area council is no different from others in the area of sanitary management.

According to the NYSC, an ideal orientation camp should be able to accommodate a minimum of 5,000 corps members, with facilities like beds, mattresses, ceiling fans and a well equipped sound proof lecture hall that can conveniently accomodate all corps members in camp.

However, most NYSC members experience a common problem of having an ideal Orientation Camp. This ‘Ideal’ is far from reality in several states of the federation with corps members sharing their difficult experiences.

Recently, the director general, NYSC, Major General Suleiman Kazaure, expressed his displeasure over the dilapidated condition of facilities at the orientation camp in Paiko, Niger State during his visit to the 2018 Batch ‘C’ Stream Two Corps Members who were undergoing induction course.