Deaths on the Numan-Jalingo highway 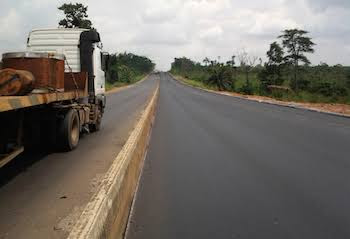 Travellers continue to avoid the road from Numan, Adamawa State  to Jalingo, Taraba State for fear of possible attacks by suspected local ethnic militia in Baali communities despite assurances of improved security from military authorities.
Commander of the 23 Armoured Brigade Brigadier General Muhamad Bello told our correspondent that a joint security operation had restored normalcy on the road that connected southern part of Adamawa State with Taraba State. Bello said multiple security check points had been erected to checkmate the local militia unleashing terror on innocent travelers, saying vehicular activities were gradually returning to the area while the operation which was planned to end in a month may be extended.

He said, “The governor just called me, asking for extension of the operation. He said he is coming in tomorrow and we are going to meet and discuss. The vigilantes cannot dare operate there because of our presence on the road together with police, civil defence corp and the DSS personnel but I cannot confirm any arrest by the police.”
The road has been deserted since the militia operating as vigilantes in the farming communities resumed attacks on innocent travellers perceived to be enemies in revenge for attacks by suspected Fulani herders.  Motorists avoiding the road since resumption of highway attacks are taking a safer route, Mayobelwa- Jada Road.

The area had suffered a series of attacks on both farming communities and Fulani settlements, causing deaths and displacement with communities accusing each other of aggression in the crisis which stemmed from cow rustling and encroachment on farmlands. Adamawa State Chapter of Muslim Council had in October expressed concern over failure by the police and other security agencies to effect any arrest despite continued killing of Muslim travelers by known vigilante groups. Chairman  of the council, Abubakar Sahabo Magaji said Dura Du style killings had been going on in the villages dominated by Baali ethnic group where innocent travellers were freely attacked
The council was responding to the beheading of four Hausa travelers on a truck from Gombe on October 15. Four persons were hospitalised while five others went missing. He lamented that earlier on October 2, a 42 year old man from Kano State  was beheaded along with nine children and the remains of the slain adult was taken  to Kano for burial without head.
“The Muslim Council of Adamawa State wishes to draw the attention of the general public and the authorities concerned, that it seems another Dura Du of plateau State is also being created along Numan-Jalingo road, where innocent Muslim travelers are waylaid and killed by armed Baali Militia Group”.
It added, “This is a Federal road, which is supposedly under rehabilitation. Unfortunately, these armed Baali Militia Group have taken over the place, attacking and killing innocent Muslim travelers at will despite numerous police and military check points. Up to this moment, no single person is arrested and prosecuted in connection with all these heinous crimes.”
Police spokesman SP Othman Abubakar had earlier confirmed the October 15 attack in Pasham village by local militia despite pleas from the district who tried to save the victims.
Some of the travellers interviewed said although security was restored along the road, failure to punish perpetrators of attacks could embolden them to carry out fresh attacks whenever security is relaxed.