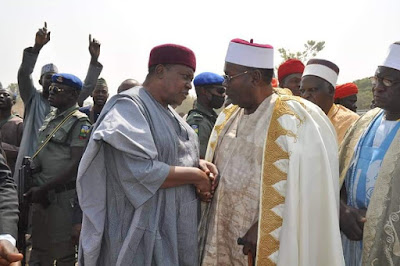 A prominent monarch in Benue State, Prof James Ayatse, on Saturday, appealed to the Taraba State Governor, Darius Ishaku, to carry  his people (Tiv) in  the state  as indigenes of Taraba.
The Tor-Tiv  made the appeal during a security meeting between the Benue and Taraba state governments  at the Federal University, Wukari, in Taraba to find ways to  tackle  insecurity along the Taraba-Benue border.
He  said, “Your Excellency, before the colonial rule, Tiv and Jukun were living together in this area.
“You will recall that before independence, a good number of Tiv people were administered from Wukari under the traditional authority of the Aku Uka and till date, a good number of Tiv people are in Taraba as indigenes.
“I, therefore, appeal to you to consider the creation of chiefdoms for the Tiv people of Taraba as done by your administration recently for other tribes in the state.
“The Tiv people, who have been found worthy in the services of the state should be considered and given a chiefdom of their own to give them a sense of belonging as indigenes of the state.”
The monarch, who was represented by the Tor Kwande, Chief Ambrose Iortyer, said the Tiv Area Traditional Council had created a district for  the Hausa in Gboko, the  Jukun in Abinsi and other smaller tribes.
Ayatse lamented the rate of criminality, especially along  the border between the two states and called  for peace in the area.
Our correspondent reports that there was outrage in the state over the non-inclusion of the Tiv in the  54 chiefdoms created  by Ishaku recently.