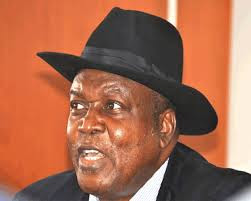 Taraba State Governor, Darius Ishaku, has received the flag of the Peoples Democratic Party (PDP) to fly it at the 2019 governorship election.
The governor, who clinched the ticket in landslide, was given the flag by the PDP National Chairman, Prince Uche Secondus, in Abuja on Wednesday.
Ishaku, who is seeking a second term, on Thursday showed the flag to the party stalwarts and supporters in Jalingo when he landed at the Danbaba Suntai Airport in the State capital.
He was accompanied in the Overland aircraft by senators Emmanuel Bwacha (representing southern zone) and Shuaibu Isa Lau (representing northern Taraba) among other dignitaries
On arrival, the governor handed the flag to the PDP State chairman, Victor Bala, who together with the Deputy Governor, Haruna Manu, Speaker Abel Peter Diah, the governor’s wife, Anna Ishaku, and other government officials, received him.
Ishaku is now ready for the 2019 governorship poll. His return with the PDP flag in the State capital heralded wide jubilation by the PDP supporters.