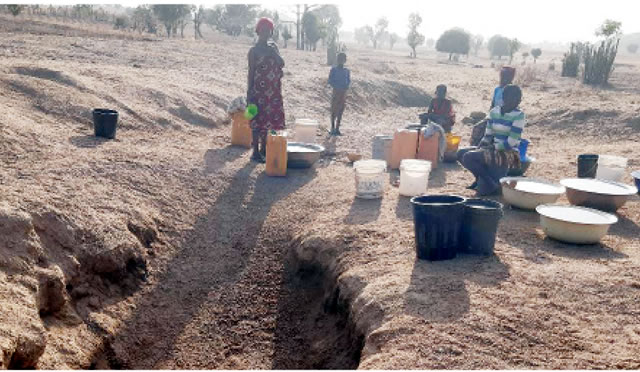 Bitako Jeng, a community located about three kilometres from Zing town in the Zing Local Government Area of Taraba State like many other communities in the state is battling intense water scarcity.

Located on a dry land along Zing-Lamma road, the agrarian community lacks basic amenities.  There is no access road to the community, no electricity and potable water. 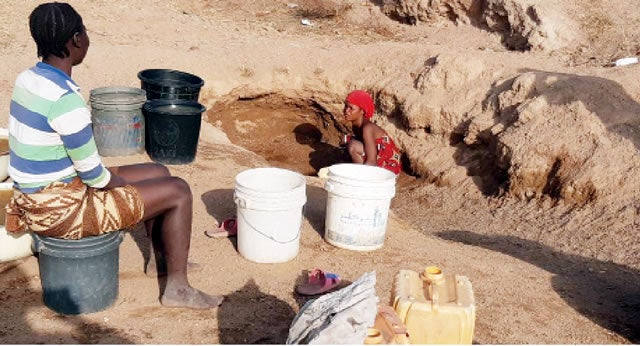 The only borehole in a nearby community sank in 1978 has since become desolate.

Tanko Kalamu, a resident of the village who lamented that they had been abandoned by politicians who they voted to represent them in government, vowed to resist any of them from campaigning in the village unless basic amenities  were provided for the community.


He said, “Our women don’t go to the farms or do anything once it’s dry season. If you stay here in 24 hours, you will see women waiting for water to come out so they could fetch for domestic use.

“In the night, the men take over to ensure that cows don’t destroy our source of water. It’s unfortunate that last year we lost two people from snake bite at different occasions while trying to get water.


“Those from the mountains and other far villages do leave their homes around 3am to search for water and sometimes get home by 5pm or 6pm. This is unacceptable. We must do something about this since government seems to have forgotten about us including the people we elected to represent us.”

Another resident, Mr Shonvo Moses told Saturday PUNCH that people usually travel for hours to other ponds to fetch water.

According to him, the situation becomes difficult during the dry season when they have to defy the scorching sun emitting extreme heat wave in search of water.


Moses added, “It has been a difficult experience for us. Our women have to go to pond far away from our place to fetch water. That is the same pond where our animals also drink.

“During the dry season, some of our children especially the females stop going to school because of lack of water. They spend long hours waiting for their turns to scoop water.

“We learnt that the state government is donating boreholes to communities in the state and we beg them to remember us. If we have a borehole in our community now, half of our problems will be solved.’’


When our correspondent visited one of the areas where women in the community spend hours in the queue to scoop water, it was lamentation galore as the women took turns to narrate their experiences.


It was surprising to see the water the women spend hours to fetch. Apart from being brownish, the water was thick. A local farmer and businesswoman in the community, Mrs Lamma Kpanti, said many women spend many hours in search of water which she said caused typhoid for them.


“We know that the water we spend hours to fetch and sometimes fight over is not good. But we don’t have alternative.


“Oftentimes, people of the community are diagnosed with typhoid fever which I believe comes from the bad water we drink. It’s really bad but we don’t have a choice,” she lamented.

A nine-year-old girl, Joy Tari, also said she postponed her school twice a week in search of water for her aged mother.


Tari noted, “I wake up early and trek for over 40 minutes to where we fetch water and because of the queue, we have to fetch turn by turn and by the time I got home, it’s usually late to go to school.”

Commenting on the issue, Coordinator of the Justice Development and Peace Commission, Rev. Stephen Bakari, said the church would examine the possibility of intervening in the community in its next phase of provision of wells and boreholes.

He stated, “We are not a government agency, but as a church we saw the need to intervene in the provision of water which is one of the basic necessities of life. We have provided over 100 boreholes and wells in communities across the state and we are doing more. In few days, we will be in Monkin in Zing local council area to drill a borehole. Plans are on to dig two wells in Lamma apart from the borehole we inaugurated there last week.

“The funds for these projects are being provided by Misereor; a group of bishops in Germany. The situation in Bitako Jeng is a serious one. Unfortunately, we have to spread our projects so they wouldn’t benefit from our intervention this time. I believe government will do something about their plight.”

Speaking with Saturday PUNCH, Caretaker Chairman of Zing Local Government Council, Christopher Kashonba, said he was aware of the challenges facing the community.

He, however, said there was no fund to provide water for the community.

Kashonba said, “You know what is happening in the local government system now. We don’t have money to execute projects but we are trusting God that things will improve.”