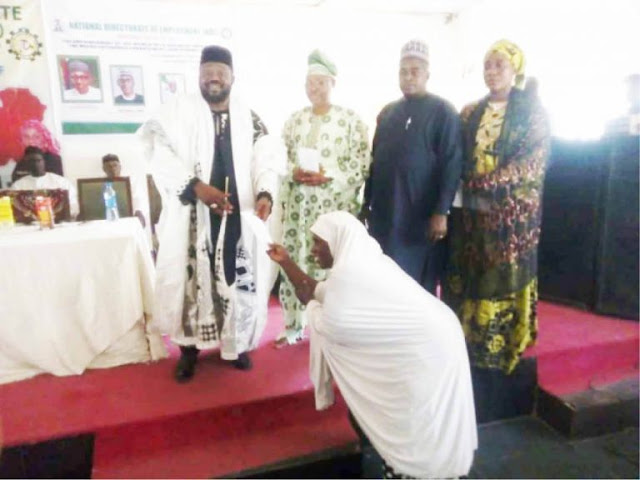 More women are now into small businesses in Taraba following the introduction of micro enterprise enhancement programme by the National Directorate of Employment (NDE).

Under the initiative, women are trained on entrepreneurship programme after which a small capital of N10,000 would be given to each of the beneficiaries as a loan to start a small business. Safiya Ibrahim, a 30-year-old house wife, is one of the beneficiaries of Micro enterprises enhancement programme introduced by National Directorate of Employment (NDE) in Taraba State.

She is among 160 women that were trained by the Directorate on entrepreneurship. Another beneficiary, Mr. Ruth Bala told our reporter that she started her business of frying Akara with only N3,000 and the N10,000 given to her by NDE was a good opportunity for her to expand her business.

The state coordinator of NDE, Alhaji Adebisi Aderemi said the sum of N6.6million was expended by the Directorate, which disbursed N10,000 to 160 women each to start a small business on micro enterprises enhancement between 2019 and this year. The money was presented to the women who were drawn from 16 local government areas of the state at a brief ceremony after their entrepreneurship training in Jalingo by the Directorate’s coordinator in the state, Alhaji Adebisi Aderemi.

Aderemi, who represented Director General of the Directorate, Dr. Nasir Ladan Argungun, said the disbursement was part of President Muhammadu Buhari’s passion for the improvement of the economic status of women in every part of the country. The DG, stated further that the Directorate would continue to fashion out other programmes, which will empower Nigerian women. Dr. Argungun said 480 women in the state are to benefit from the programme, adding that the first batch of 320 drawn from the 16 local government areas of the state have undergone skills training.

He said: “The women were selected because they exhibited a sense of responsibility and desire for self-actualization through the establishment and management of their small business until they become masters in the economic game.”

He urged the women to tread the same paths by making judicious use of the experience acquired as well as the empowerment package to make progress in the ventures.