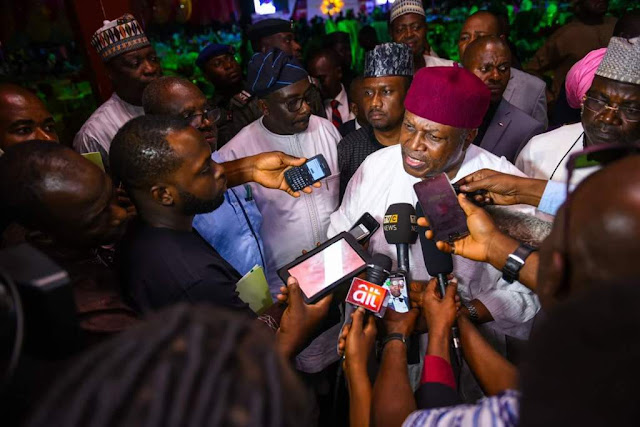 The Governor of Taraba state, Darius Ishaku, is expected to return to the state today after about 10 weeks of absence.
The Commissioner for Information and Orientation, Hon. Danjuma Adamu, made this known to the Blueprint Wednesday in a telephone chat from Jalingo.
He said that elaborate arrangements had been put in place to give the number one citizen a rousing reception at the Danbaba Suntai Airport, Jalingo.
Dignitaries expected to receive him on return include members of the state’s Executive Council, led by the Deputy Governor, Engr. Haruna Manu, state party boss, Hon. Victor Kona, top ranking civil servants, high profile traditional rulers, major stakeholders and party stalwarts.
Governor Ishaku’s last major assignment in the state was the swearing-in of the last batch of commissioners on December 20, 2019 after which he travelled to Abuja and had a domestic accident for which his doctors advised that he should be placed under their watch.
Hon. Danjuma explained, “During the period that the governor was recuperating in Abuja, he has been conducting the affairs of the state seamlessly and there was no vacuum created by not being physically present in the state.”
He said his principal’s home-coming today belied all kinds of insinuations that the state’s chief executive had been incapacitated.
It will be recalled that the governor’s prolonged absence generated a lot of controversies in several quarters in the state. The main opposition party, the All Progressives Congress (APC) was in the forefront, calling on the state assembly to invoke the relevant constitutional provisions to declare the governor as being incapacitated and should be impeached and the mantle of leadership passed to his deputy.
The commissioner praised the people of Taraba state for standing by their governor during his recuperation period, noting that no human being is cast in stone and immune to sickness even if he were a governor.