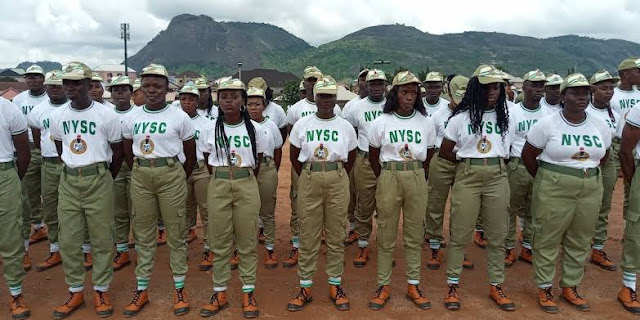 In a visit to Taraba State camp located at Sibre, along Jalingo-Wukari Expressway, corps members in their number were queuing up to be documented as others were seen loitering around in disarray.

The State Coordinator, David Markson, who declined being interviewed stressed that the directive by the NYSC Director-General, Shuaibu Ibrahim said “no state coordinator should speak to the press except the DG.”

Although the corps members are undergoing an emergency clearance for their monthly allowances, they are however expected to depart immediately after receiving same.
Meanwhile, some officials who preferred anonymity explained that arrangements are in top gear to convey them to their respective destinations, though no mention of either they will be taken to their respective homes or places of primary assignments.
In Bayelsa State, Channels Television observed that corps members at the Kaiama Orientation Camp were waiting to receive their posting letters.
Similarly in Niger State, corps members were seen relaxing themselves in their camp at Paiko, in Paikoro Local Government Area of the state
The State NYSC coordinator refused to comment on the implementation of the government’s directives.
 Scene of the Niger camp
As some corps members confirmed that they are being paid N1,400 as bicycle allowance some other traders at the camp are not happy with the ban.
Some of them said they paid to gain access to the camp for three weeks, only to be told barely a week after that the camps would be shut down.
According to them, the Federal Government would not have allowed camps to open in the first place.
In Kano, the camp located in Karaye Local Government Area has complied with the directives to ensure that 2184 corps members are all posted to their Places of Primary Assignment with no hitches.
The state coordinator, Aisha Mohammed assured that all corps members were posted to different locations across the state and have started leaving the camp.
According to her, transportation was made available in collaboration with the local government chairman at a short notice to make sure of the safety and non-extortion of corps members.
Similarly in Lagos, the state chapter of the scheme has obeyed the directive to shut down the NYSC Orientation camp.
The NYSC State coordinator, Mr Eddy Mega said the camp will be shut down indefinitely, adding that the 2253 corps members will be given their posting letters.