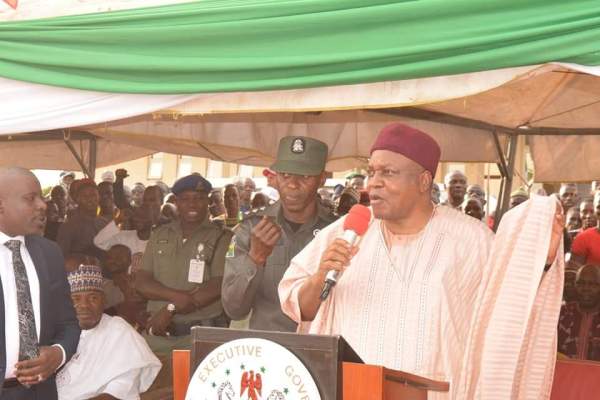 Taraba state Governor, Arch. Darius Dickson Ishaku on Thursday returned to a rousing welcome in Taraba after undergoing medical treatment following injuries he sustained from a domestic accident.
The governor’s plane touched down at the Danbaba Suntai Airport Jalingo at about 4pm.
The Governor while addressing journalists at the Airport announced a ban on hand shake in the State as a part of measures to check the spread of Coronavirus in the State.
He enjoined the people of the State to promote personal hygiene and practice hand washing using soap and sanitizers to check the spread of the dreaded virus.

“For now, people should avoid hand shakes and imbibe the culture of personal hygiene as recommended by the World Health Organisation.
“We don’t have test kits available here and we must prioritise personal hygiene to avoid the virus.
“People should avoid travelling to places where cases of the virus have been confirmed. Business transactions and conversations with people in such places can be done online,”he said.

Ishaku told journalists during the interview that he was involved in a domestic accident and that he underwent a surgery during his long stay away from the State.
According to him, he was yet to fully recover from the accident, adding that he was following his doctor’s advice while he recuperates.
He thanked the people of the State for keeping faith with him while he was away, noting that “contrary to media reports in some quarters governance in Taraba did not suffer while I was away.

“Road projects are going on and the act of governance generally is going on smoothly.
“The dualization of the welcome to Jalingo road from the NYSC is ongoing. The Kurmi road project is progressing steadily and governance is at it top gear in the State. We will not relent in our efforts to rescue the State,” he said