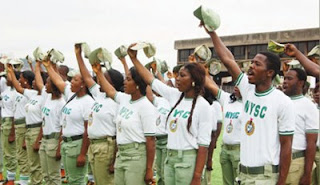 Jalingo — Members of the National Youth Service Corps (NYSC) posted to Adamawa State are holding their orientation course in Taraba State due to the security situation in the state.
The corps members who are part of the NYSC Batch 'A' Stream II of 2015, yesterday in Jalingo, took the oath of allegiance which was administered by the Taraba State Chief Judge, Justice Josephine Tuktur.
It was gathered that after completing their orientation camp in Taraba, the corps members will be posted to serve in various areas in Adamawa.
President Muhammadu Buhari, whose speech was presented at the occasion by representative of Adamawa State governor, Alhaji Sani Salihu, assured of government's commitment to the fight against terrorism.
He charged the corps members to shun greed, corruption and all social vices that will impede the collective efforts of moving the nation forward.
He commended corps members for their role in the general elections.
Earlier, Adamawa State Coordinator of NYSC, Umaru Joro Daniel, appealed to the state government to increase corps members allowance, saying such will motivate them to perform well.