Gov. Ishaku in Moves to End Water Scarcity in Taraba 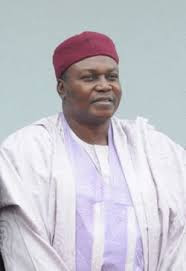 Jalingo — Due to the shortage of portable water that has enveloped the city of Jalingo, the capital of Taraba state and its environs, the state governor, Darius D. Ishaku, has ordered for the immediate overhauling of the entire water plants in the state.
The governor wondered why the people would continue to go about in search of drinking water, when the much needed equipments to pump water to the nooks and crannies of the state are available, he urged those in charge of making water available to the people to as a matter of urgency make it available or find themselves to be blame.
The governor who gave this directive Tuesday through a press release signed by the Senior Special Adviser on Media and Publicity, Sylvanus Y. Giwa, also directed for the immediate repairs of "all the boreholes" that service the state through water pipe networks.
He voted 8.5 million naira to the state water supply agency for the immidiat action on the water suply.
The noticed with sadnnes that lack of portable water in the state, has compelled the people to find alternative in "unsafe water resources" the action which according to him was hazardous to community health must as a matter of urgency be put to an end, hence the directive for the overhauling of the water plants.
He also stress his readiness to make essential services available to the people, he vowed not to tolerate any form of indolence are excuses from public servants who derives pleasures in derailing from their assigned responsibilities stating that "there is no laxity or disregard for assigned duties."
Ishaku who went ahead to call on those responsible for the flow of water in the state, gave an ultimatum of one day in which water must gush out of the plants to the people domiciling in areas like Mayo Gwai, Magami, Nassarawo etc.
Before now, the dream of the people having access to portable water in the state especially in Jalingo metropolis have being a mirage as the immediate past administration was never perturbed about the situation which has forced the people to source for water in the same ponds with pigs and other creatures.
As at the time of filing in this report, water which had in the past turned out to be an economy goods, as noticed by our reporter, has started flowing in some parts of the state capital.
Mean while, the governor who went ahead to pay an unscheduled visit to the Taraba Gass and the Taraba Transport Cooperation, also expressed dismay, at the way and manner the companies are being run.
Both companies that are owned by the state government as observed by The Vanguard have in the past suffered series of neglect, the situation which the governor said is acceptable, hence is readiness to as well overhaul them so as to improve the Internal Generated Revenue {IGR}of the state.
Some residents of Jalingo metropolis who bared their minds on the development, felt sad that the past leadership of the state never deemed it fit to make water available to the people in spite of the availability of the needed water plants.
"To me, what is dear to the ordinary man in the streets is water and security. And now that the new governor has succeeded in bringing back water to our dried taps, he should please go ahead and take the same step in restoring peace to all parts of the state."
The top civil servant who seeks for pen protection, said workers in the state are ever ready to play their roles "only if all leaders would be like this governor, because our past leaders here in this state, did not encouraged as at all."