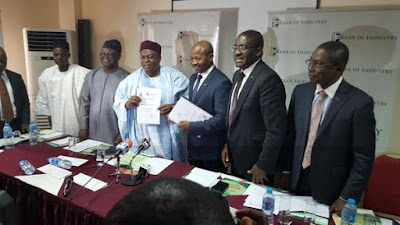 The Bank of Industry and the Taraba State Government on Wednesday signed a Memorandum of Understanding for the establishment of a N700m Micro, Small and Medium-scale Enterprises Development Fund.
The pact, which was sealed in Abuja, saw the Managing Director, BoI, Mr. Rasheed Olaoluwa, signing on behalf of the bank, while the Governor of Taraba State, Mr. Darius Ishaku, signed on behalf of the state government.
Under the agreement, the state government will contribute the sum of N350m, representing 50 per cent, into the fund, while the balance will be contributed by the BoI.
The governor described the pact as one of the game changers that would transform Taraba into an industrialised state through the creation of employment opportunities for the people.
He said having taken the oath of office 12 days back, the agreement would encourage the people of the state to be self-reliant as well as reduce poverty, which was the aspiration of his administration.
Ishaku noted that in demonstration of his administration’s commitment to the pact, the state had already released its share of the fund to the BoI, noting that having fulfilled the obligation of its counterpart funding, the bank should as a matter of urgency commence the process of disbursement of the loan to the residents of the state.
ADVERTISEMENT
He said, “Taraba State is richly endowed with vast fertile land and other natural resources yet, majority of the people live in abject poverty due to lack of entrepreneurship/business development knowledge.
“It is my firm conviction that if these resources are properly harnessed, the state could be poised for a promising future. Therefore, the need for a programme that is aimed at entrepreneurship cannot be overlooked but rather be given support, not only to grow, but to be sustained.”
Olaoluwa, who also spoke at the event, said that with the pact, Taraba had emerged as the second state in the North-East region to partner with the bank under its States’ Matching Fund Scheme.
He said the strategy that would be adopted in the administration of the matching fund in the state would be to finance projects in identified agricultural and solid minerals clusters.
Some of the clusters are the Mambilla Plateau for tea and coffee; Jalingo for rice; Wukari for cassava; Gembu for dairy products; Sarduana for kaolin; and Ibi for barites.
Olaoluwa said the bank had before now approved loans totalling N299.4m for 18 enterprises in Taraba State, noting that 135 direct and 400 indirect jobs had been created by the enterprises that had drawn down on their loans.