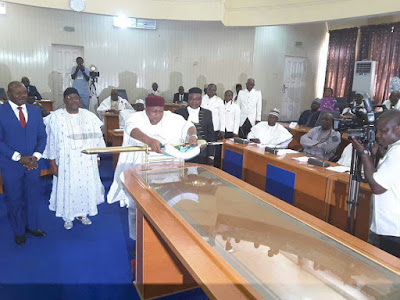 Governor Darius Dickson Ishaku on Thursday presented the 2020 budget estimates of N213.63billion which he tagged “Budget of Accelerated Growth and Development” to the Taraba State House of Assembly for consideration.
Presenting the budget at the Taraba State House of Assembly Complex in the state capital, Jalingo the Governor said the budget estimates was to consolidate on his progress in the past years.
Governor Ishaku while presenting the budget expressed gratitude to the legislators for their continued support and urged them to consider and pass the budget speedily in other for him to be able to deliver the intent of the budget to Tarabans.
The governor on his part promised to always exercise his constitutional role in making sure the functions of the legislators are carried out as expected.

The Speaker, Taraba state House of Assembly, Rt. Hon. Dr. Albasu Joseph Kunini appreciated the Governor for coming to present the 2020 budget within the constitutionally given time.
Rt. Hon. Alkinjo assured the Governor that the house will give the budget the desired attention, speedy deliberation, consideration, and passage.
He told the Governor that the house is ever ready to give him all the support he needs to enable him to achieve the desired goals he has set for the good of Tarabans.
The budget of Two hundred and thirteen billion, six hundred and thirty two million, seventy six thousand, eight hundred and ten nairn, zero kobo (N213,632,076,810.00) was proposed with Works, Education and Health as top priorities.