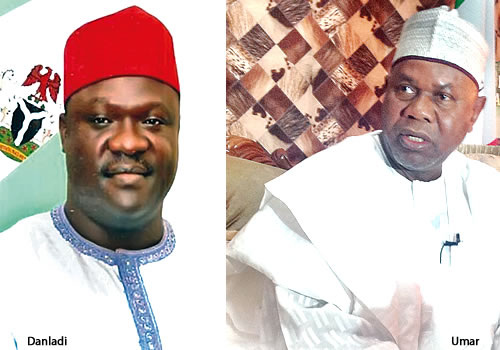 The Presiding Judge of the National Industrial Court, Jos Judicial Division, His Lordship, Hon. Justice Kenneth Amadi has dismissed that case filed by ALHAJI GARBA UMAR on his claim for entitlements as acting Governor in November 2014 against TARABA STATE GOVERNMENT for lacking merit and nullified Taraba State Governor and Deputy Governor’s pension law, 2015.
The Court held that State House of Assembly in Nigeria lacks the power to fix any amount in remuneration to its past Governors and Deputy governors as pension or gratuity unless the Revenue Mobilisation Allocation and Fiscal Commission first of all determined an amount as pension and gratuity to past Governors and Deputy governors in which case such amount, so fixed, shall not exceed the amount as have been determined by the Revenue Mobilisation Allocation and Fiscal Commission.
From facts, following the purported impeachment of the Deputy Governor of Taraba state; Alhaji. Sani Abubakar Danladi, the Claimant was appointed to be the Deputy Governor of the state by the former Governor Mr. Danbaba Danfulani Suntai with the approval of the Taraba State House of Assembly on 5th October 2012. Thereafter, the Taraba State House of Assembly passed a resolution on 14th November 2012 mandating the Claimant to act as the Governor of the state.
Alhaji Sani Abubakar Danladi challenged his purported impeachment up to the Supreme Court, and the Supreme Court on the 21st November 2014 nullified the purported impeachment and ordered his reinstatement as the Deputy Governor of the state.
Consequently, it was the case of the Claimant that by virtue of the Taraba State Governor and Deputy Governor’s Pension Law, 2015 which came into effect on 27th May 2015 that he is entitled to gratuity as a former Governor and 300% of his salary as acting Governor as medical/check-up allowance and the other benefits/ entitlements as provided in that said law having occupied the office of the Deputy Governor of that state.
On the other hand, the defendant maintained that Taraba State House of Assembly by its resolution of 25th November 2014 erased every record of his confirmation and appointment as Deputy Governor and later Acting Governor that, the claimant is not entitled to any benefit or entitlements under the law or any instrument at all, that any such payment will tantamount to rewarding illegality.
The Defendant Counter Claimed for the sum of 80 million Naira General Damages for the wrongful, unlawful and tortuous invasion of the finance and accounts of the Government of Taraba State for the period 5th October 2012 to 21st November 2014 and Public Apology to the people and Government of Taraba State.
In conclusion, counsel submitted that Taraba State Governor and Deputy Governor’s pension law, 2015 is illegal so long as it further provided for severance allowance by the State House of Assembly which has already been provided for under the RMAFC Act.
In opposition, Counsel to the claimant submitted that despite the Supreme Court’s decision, the Claimant’s appointment, oath of office and actions cannot be wished away simply because the Supreme Court reinstated Alhaji Sani Abubakar Danladi as the Deputy Governor of Taraba State and having served in that capacities, he is entitled to the claims brought under the said Law.
Delivering judgment, the presiding Judge, Justice Amadi held that the power granted to a State House of Assembly to provide for pension and gratuity is a mere directory or permissive power which is not mandatory.
“From the foregoing, it appears that there is a contradiction by the provision of section 124(5) which enabled the House of Assembly of a State to provide for pension or gratuity to Governors and Deputy Governors which items are also placed under the Exclusive legislative list under Part 1, of the Second Schedule to the 1999 Constitution.
“The question then is how to reconcile these two provisions of the constitution. The answer is by adopting a purposeful approach by which the court is required to look at the constitution as a whole and construe its provisions in such a way as to give effect to the general and specific purposes for which it was enacted; that is good governance and the welfare of all Nigerian based on the principles of equality and justice.
“Since the Revenue Mobilisation Allocation and Fiscal Commission has not fixed any amount as pension and gratuity to past Governors and Deputy governors in Nigeria, any law made by any State House of Assembly granting pension and gratuity to its past Governors and Deputy Governors is therefore null and void. To that extent, I hold that the Taraba State Governor and Deputy Governor’s pension law, 2015 is null and void.
The court dismissed the suit for grossly lacking in merit and struck out the counterclaim for being statute-barred.