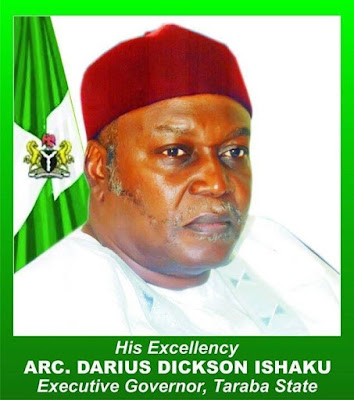 Taraba state governor, Darius Ishaku, has expressed concern over unethical activities of some social media users which he believes is a threat to the nation’s democracy.

Speaking at the swearing in of 12 permanent secretaries, Governor Ishaku distanced the executive arm of government from the internal crisis in the state House of assembly.

He said that though there was provision for freedom of speech in the nation’s constitution such rights should not to be abused on social media.
Taraba recently trended on social media with reports that the governor’s wife was involved in the recent crisis in the state Assembly. Governor Ishaku and PDP state chairman were accused being co-conspirators who fueled the crisis.

The Governor has since come out to deny this, insisting that what happened in the House of Assembly was purely a legislative matter which the
executive arm of government played no part in.
He is not comfortable with what he describes as blackmail on social media and wants a policy enacted that will protect innocent citizens from undue
attacks.

The former Minister of Power and productivity, Joel Ikenya and the Peoples Democratic Party State chairman throw their weight behind the hate speech regulation bill.
The simmering political crisis in the state House of Assembly was doused when Governor Ishaku’s political son, Abel Peter Diah resigned as Speaker
on what he termed “personal grounds”
Governor Ishaku has appealed to the lawmakers to put their House in order despite claims in certain quarters that the executive arm of government initially stirred the crisis which eventually consumed many principal officers.