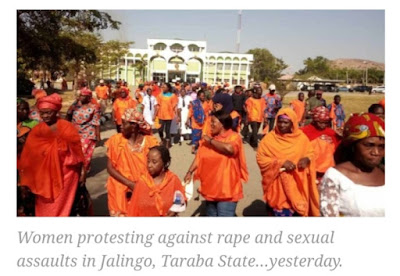 Women took to the streets of Jalingo, Taraba State yesterday to protest against violence on women and girls, especially victims of rape and all forms of sexual assault in the state.
Insisting that the law and authorities have failed to protect women from sexual assaults and other related violence, the protesters said they decided to expose the crime by speaking up on what they described as a crime against humanity.
“We will no longer keep silent in the face of violence by taking the bull by the horn in coming out en-mass to speak for the voiceless among us,” they said.
The women, who were led by the Taraba First Lady, Ann Ishaku, stressed the need for all relevant authorities to intervene by putting an end to gender-based violence, stressing that the need to speak up against sexual abuses could no longer be overstretched.
The protesting women, who left their local government areas to converge on Jalingo, frowned at the incessant violence against women and girls in the state and entire country.
Dressed in orange colour attires and carrying placards with various inscriptions such as: “Break The Silence, Sex Without Consent Is Rape; Good Men Should Stand Up And Get Involved; Stop Gender Discrimination and Say No To Violence Against Women And Girls, among others, they admonished victims of rape and other related violence to speak up by breaking their silence.
Activities marking the 16-day demonstration, which began with the empowerment of women and girls in Internally Displaced Persons (IDPs) camps across the state, also saw the training of no fewer than 136 women in different vocations.
During the peaceful protests, which began from the state House of Assembly and terminated at Government House, Jalingo, the women presented their letter of protest to the leadership of the House, urging the lawmakers to, as a matter of urgency, sign the Child Rights Act for immediate domestication in the state.
Urging members to join hands with the women to curb violence against women, they said the need for members to ensure domestication of the Child Rights Act, which had since been passed into law, had become necessary.
The First Lady, who said their focus was to make life more comfortable for women, lamented that, “Rape and sexual violence is on the increase, hence the need for us to rise up and end it.”
Determined to use her Hope Afresh Foundation to end assaults on women and girls, she advocated that they should come together and fight the menace, adding, “So that rape now ravaging our society would be eliminated.”