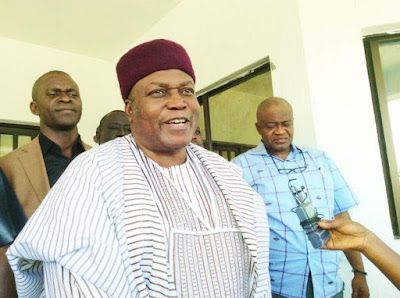 The Tiv people of Taraba State on Sunday appealed to Governor Darius Ishaku to expedite action for the return of all persons displaced by the Jukun/Tiv crisis in the state to their homes.
This was contained in a communique issued and signed by the Chairman of Tiv Traditional Leaders Council and Ter Tiv Bali, Chief David Gbaa and Secretary Tyoor Gunduma, Zaki Targema Ukange at the end of the 3rd Ijir Tamen/19th Tiv Day celebration held in Bali.
The Tiv people in the communique condemned the lingering Jukun/Tiv crisis in the state.
They also called for understanding on the part of the people, saying without peace there would never be any development.
The Ijir Tamen which is an assembly of all Tiv traditional leaders and Tiv stakeholders in Taraba State said the quick return of all displaced people to their homes and resettlement would fast track achievement of permanent peace.

The council also condemned the unfortunate crisis in Dan-Anacha in Gassol Local Government Area, following the renaming of the village to Kwararafa.
Part of the communique read: “The meeting resolved that the Tiv people are not against the creation officer  Kwararafa Chiefdom, but the government should allow the name of Dan-Anacha to stay same as we have Nukkai, Mayo-Dassa, Mayo-Gwoi and Magami among others in Jalingo and other towns in the state.
“We want to emphasize that we are not settlers in Taraba State as being promoted in some quarters and that the government of Taraba and our neighbours in the state should accord us our rights and privileges as indigenes of Taraba State.
“The Ijir Tamen cautioned against external interference in the selection of Tiv traditional leaders in the state and urged Tiv Traditional Leaders to help preserve the culture and tradition of the Tiv to prevent it from extinction.
“We want to urge the government and the public to be wary of some Tiv persons parading themselves as Tiv leaders as only the forum of Tiv Traditional Leaders, Tiv Cultural and Social Association/ Youth wing in the state have the right to speak on behalf of the Tiv people of Taraba.”
The council also urged the Tiv people to pursue peace and unity of purpose for the collective development of the state.