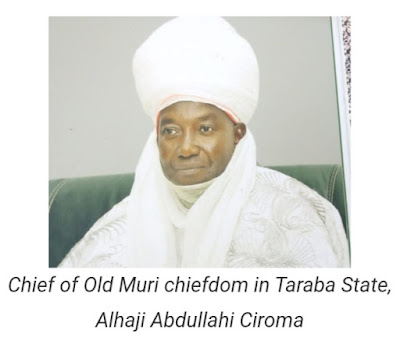 The Chief of Old Muri chiefdom in Karim-Lamido Local Government Area of Taraba State, Alhaji Abdullahi Ciroma, has raised alarm over the high rate of snakebite and banditry in his domain. He told North-East Trust in his palace at Old Muri town that his subjects were being killed by snakebite.

According to him, people are no longer safe in their houses, at the farms and even in schools.


Alhaji Abdullahi Ciroma stated that deadly snakes had invaded his domain and were releasing deadly venom on their victims, including men, women and children, resulting to many deaths. According to the monarch, anti-snake venom used to be free at General Hospital, Banbur, a distance of about 25 kilometers from the chiefdom but now the drug is no longer available. He said as a result of non-availability of the drugs, snakebite victims have to be taken to Kaltungo General Hospital in Gombe State, a distance of more than 60 kilometers. He said the road to Kaltungo is un-tarred and hilly and it takes hours, which always result to death of many victims before reaching the hospital.

“There is no tarred road in my chiefdom and we only use motorcycles and four-wheel cars to take snakebite victims to the hospital and in most cases the victims died before reaching the hospital,” the monarch said. The monarch called on Taraba and the federal governments as well as international agencies to come to the aid of his community and other locals in Karim-lamido Local Government Area, who are also living with threat of deadly snakes.


He also lamented over insecurity in his domain, saying incidents of armed robbery and kidnapping are being recorded on almost daily basis. Alhaji Abdullahi stated that on Monday, two of his village heads, their secretaries and the chairman of the vigilantes were killed by unknown gunmen.


He said his subjects now sleep with one eye open because of fear of bandits that attack people on their farms and houses. The monarch blamed the crimes in his domain on bandits that cross from neighbouring Plateau and Bauchi states. He appealed to the Taraba State government to prevail on the federal government to establish a police mobile base at Old Muri, headquarters of the chiefdom to address insecurity in the area.

Alhaji Abdullahi also told North-East Trust that there was acute shortage of portable water in his domain. He revealed that two out of three boreholes that he personally contributed had stopped working, causing people in the area untold hardship. He called on the government and philanthropists to assist by repairing and providing additional boreholes in the area.