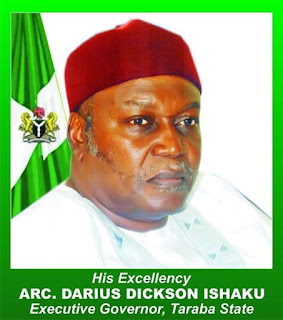 Although it began as a minor internal misgiving with Taraba State House of Assembly, which led to the exit of Speaker Abel Peter Diah and Deputy, Charles Maijankai, the rumble is gradually igniting political Tsunami that could swallow Governor Darius Ishaku. Signs that the quagmire, which pitted House of Assembly and the executive arm, might get even rockier next year emerged recently as some of the lawmakers have started perfecting plans for an eventual removal the governor, Ishaku, from office by impeachment.

As at the time of filing in this report, eight out of the 22-member House of Assembly have allegedly relocated to Abuja to perfect the impeachment plots. Investigation by The Guardian reveals that the move against Ishaku is being empowered by one of the political top shots from the state that fell apart with the governor.

Armed with various forms of documents, the members are said to have gone as far as drawing the attention of the Economic Financial Crime Commission (EFCC) and the Independent Corrupt Practices Commission (EFCC) to some of the alleged inflated contracts and protects being executed by the governor. Citing the Green House Project, the 20 kilometres Pantisawa Road projecs among others, the aggrieved members, who have sworn to “thread all available and legitimate paths,” are said to have sourced all the needed documents relating to financial transactions by the governor from May 29, 2015 to date. It was gathered that the lawmakers relied on their loyalists and cronies in the state Ministry of Finance.

Sources told The Guardian that the legislators’ move was precipitated by the covert role allegedly played by the governor in stoking the recent upheavals, which rocked the state House of Assembly. The tense situation compelled both the former speaker and his deputy to take a bow by tendering their resignation letters. With the sanity and stability that has returned to the legislature, the lawmakers have decided to fight back collectively and are leaving no stone unturned in their bid to nail the governor.

How the lawmakers would garner the required numbers to undertake the rigorous process of impeaching the governor is yet to be seen. However, at the time of filing this report, it was gathered that the required number has not been met, even as the arrowheads and their sponsor insist on meeting their target by the first quarter of 2020. It was also gathered that the leadership of the ruling Peoples Democratic Party (PDP) has got wind of the plot and have swung into action to frustrate the “rebellious lawmakers and their criminal designs.”
A PDP chieftain confided in The Guardian that being aware of the ongoing plots, “the party, as well as the governor are taking necessary steps to frustrate the members from “carrying out their plans.”
On the claims that some documents from the finance ministry have been obtained by the lawmakers, the PDP stalwart said such documents “cannot be used to nail our governor, because there is no form of shoddy deals as being alleged by the members.”
While insisting that “majority of the lawmakers are solidly with the governor,” the PDP chief said: “I do not see their plot to impeach him (Ishaku) seeing the light of the day come next year, because to be frank with you, he has not committed any impeachment crime.” He cited the current peace being enjoyed in the state, stressing that members ought to applaud the governor for succeeding in bringing together all the ethnic groups and religions that used to be at loggerheads in the past.
It is surprising how the plot to impeach Governor Ishaku got to the knowledge of most PDP chieftains, because most of those that spoke to The Guardian claimed to be in the know, yet preferring anonymity. Could it be that a grand conspiracy is afoot?
A PDP source from Taraba North said: “It is no longer news that some members of our House of Assembly are plotting evil against our governor. It is also no longer news that the plot is being spearheaded by some overzealous politicians who see the governor as a hindrance to their 2023 governorship ambition. But we, on our part, would not allow such aspiration to come true, because the governor is not only innocent of the allegations, but have also succeeded in working round the clock to bring sanity to our dear state.”
He, however, pointed to the immunity clause that shields the governor from any form of investigation, stressing that the reference to EFCC and ICPC held no water. Moreover he expressed the belief that had the members “found any impeachment offence against the governor, they would have commenced the process in the Assembly and not going as far as intimating the anti-graft commissions.”
Counter-strategy
But while the said members are making frantic efforts to woo their colleagues, especially those from the opposition parties, to align their forces to theirs, both the state’s PDP leadership and close associates of the governor are said to be toying with the idea of breaking their ranks to ensure that the constitutional majority remains with the governor.

A close ally of Governor Ishaku boasted: “We have been directed to remain mute and watch out how they will carry out their plans. Those of them calling for the head of the governor are those who have benefited immensely from him. They are those who rode on his shoulders to become whom they are today in Taraba State’s politics.“We are not moved or afraid. One expected that now that the governor has won his case at the Election Petition Tribunal, all needed support should be given him to execute his campaign promises to the people, but unfortunately, it is the same members, who are so close to him that are now trying to distract him.”
The PDP stalwart cited the former Minister of Women and Social Development, Senator Aisha Jumai Alhassan, as an example, saying she decided to join forces with the governor to catapult the state to great heights, “I expected the state lawmakers to do same and put their differences aside by supporting the governor to move our dear state forward.”While commenting on the impeachment plot, one of the newly inaugurated commissioners, who pleaded anonymity, lamented that if the plot succeeds it would not “speak well of our state,” urging the lawmakers to “come together as one and extend helping hands to the executive in order to meet up with the yearnings and aspirations of the people, especially those in rural areas.”
Yet, some opposition members of the state Assembly disclosed that they had been reached by their colleagues, saying that they were surprised that it was members of the ruling party that were vehemently determined to remove the governor from office. An opposition lawmaker said although they are yet to make up their minds on which side to throw their weight, they are watching the development to see how it would pan out. Yet while expressing fears over the ability of the pro-impeachment lawmakers to garner the needed numbers, the opposition legislator stressed that the aggrieved members would not gain the support of all the opposition lawmakers.
He said: “Some of my colleagues, as I speak, are already wining and dining with the executive arm. So I must confess to you that it will be difficult for those pushing for the governor’s impeachment to get our hundred per cent backing.”It was gathered that the leadership of some opposition parties, especially the All Progressives Congress (APC), are now taking advantage of the development in the state Assembly. Sources indicate that some supporters of the lawmakers have started discussions with the party on the possibility of dumping PDP for APC.
It is possible that the impeachment plot would affect the cohesion of PDP and its support base in the state. Said a PDP chieftain in Jalingo: “Surely, it could affect our performances in the next general elections. The governor has been carrying all the members and the entire people of the state along irrespective of political party affiliations. But unless the lawmakers shield their swords, the governor cannot concentrate to deliver the dividends of democracy to the people and the state at large before the expiration of his tenure in 2023.”

He stated that the entire plot was informed by considerations for the 2023 governorship, a member of PDP’s state working committee, said there was need to convince party faithful that a level play ground would be made available to all aspirants, especially those who see the governor as a possible stumbling block to their ambition.

But an aide to Governor Ishaku confirmed the plot by the state lawmakers, saying: “I don’t think they have any genuine reason for their machination, because this man (Ishaku) has being open and transparent. So I do not see them succeeding at the end of the day.”

But watchers of Taraba politics believe those plotting the governor’s impeachment would have succeeded if only they made the “move earlier than now.” For instance, Shakede Johnson contended that timing is very crucial in such politically explosive plans, saying: “Assuming this plan to remove him was executed early, I think all what we are hearing now would have been a thing of the past. But unfortunately, the members have allowed the opportunity to pass them by. To be frank with you, I do not see them succeeding, because most of the people who were not pleased with the governor before have now thrown their weight behind him, because of his recent giant strides, especially in the areas of security and water supply.

“Going about hatching impeachment plots now, as far as I am concerned, is not the best for this state now. It would further drag us several kilometres backward.”