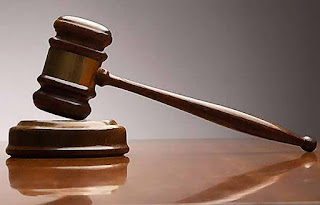 THE three-man election tribunal panel assigned with the responsibility of presiding over the national and state House of Assembly petitions in Taraba State has concluded its assignments with the nullification of several elections.
Fresh elections are now to be conducted in several polling units spread across several wards of 11 out of the 16 local councils.
The three-man panel, which was headed by Justice Samson Ajore, has both Justice Ibrahim A. Yusuf and A.M. Ali as members.
Politicians and lawyers, who bared their minds on the performance of the panel, agreed that justices were adequately done to all the petitions that were brought before it.
During the proceedings and judgments, counsel for both the respondents and petitioners laud the ruling of the tribunal.
Commenting on the activities of the panel, the lead counsel for All Progressives Congress (APC), Festus K. Idepefo, believed that the judiciary has come to the point where Nigerians, irrespective of status, would continue to hold it in high esteem.
Idepefo, who triumphed in almost all his petitions, said the panel did what was expected of it by the teeming masses of the state.
Also speaking, the APC chairman in the state, Alhaji Hassan Jika Ardo, said: “If all judges can be like this three-man panel members that were posted to this state to attend to election petitions, our judiciary in this country would have been one of the best if not the best in the whole world.
He tasked the organ responsible with the promotion and discipline of judges to endeavour to put smiles on the faces of the panel as they, according to him “have performed credibly.”
Some Peoples Democratic Party (PDP) chieftains, who also commented on the panel, agreed that the members carried out their assignments but blamed the woes of the party at the tribunal on the inability of the party leadership to “do their home work.”
One of the chieftains, who spoke under the condition of anonymity, said: “Frankly speaking, I did not see where the panel went wrong. As far as I am concerned, they did their job perfectly.
“From my observation, the reason why the APC triumphed in all their petitions and we (PDP) failed woefully was because the APC did their home work well.
“How can we succeed at the tribunal when our house (PDP) is not intact. Have you ever seen our chairman or any of the PDP officials at the tribunal?”
He said the ongoing disunity among the officials of PDP in the state made it impossible for the party to triumph at the tribunal.