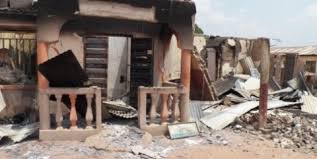 Soldiers patrolled the streets and residents surveyed damage to their homes and businesses in northern Nigeria on Monday, after deadly violence linked to the appointment of the country’s first female governor.
At least seven people were killed and 15 injured on Sunday in clashes between supporters of the ousted governor of Taraba state, Darius Ishaku, and Aisha Alhassan in the town of Wukari, according to police.
Alhassan, who is a minister-designate in President Muhammadu Buhari’s government, appealed against Ishaku’s victory in governorship polls in April and on Saturday an election tribunal annulled his win.
Ishaku, from the Peoples Democratic Party (PDP), indicated he would appeal the ruling, which dismissed his candidacy on the grounds the PDP had not followed correct procedure to nominate him.

The tribunal declared Alhassan, a lawyer known to her supporters as “Mama Taraba”, the winner.
Nigeria has never had a female governor in its 55-year independent history.
It would be another first for Nigerian elections this year, as Buhari became the first opposition leader to unseat an incumbent in the presidential vote in March.

Shehu Mohammed, a Muslim community leader in Wukari, some 220 kilometres (140 miles) from the state capital Jalingo, said 21 houses and businesses had been torched in the violence.
“So far, it is calm in the town. Soldiers are on the streets on patrol,” he told AFP by telephone.
“Occasionally they stop by crowds of people discussing the incident and advise them to remain calm and go about their daily business.

“All the homes affected in the violence were completely burnt. Nothing can be salvaged from these homes but owners are still going in there to examine the extent of the damage.”
Mohammed said those made homeless by the violence were staying in local mosques and security chiefs from the state were in town to talk to community leaders to prevent a fresh outbreak of violence.
Muslim supporters of Alhassan clashed with Christian backers of Ishaku in religiously divided Wukari, which has previously been a flashpoint of communal violence.
Daniel Musa, a local resident, added: “Fighting stopped yesterday. People are only now counting their losses. Home have been burnt, businesses have been destroyed

“But now soldiers are on the streets, there’s no sign of trouble this morning.”