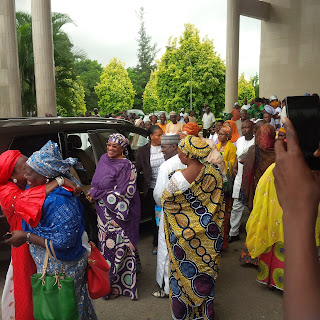 Thousand of women came out in Jalingo, capital of Taraba state to express their solidarity for the Women Affairs Minister and Governor-Elect, Sen. Aisha Alhassan following the Nov. 7, 2015 tribunal verdict that declared her the duly elected Governor of the state.
A woman leader in the state  Hajiya Zainab Ibrahim speaking at an event to mark Aisha's victory said the gathering of the women which cut across religious divide  was to reaffirm their support and encouragement to Sen. Aisha in her struggle to get back the mandate bestowed on her by the people of Taraba.
She said contrary to the insinuations being peddled by some politicians in the state that the heavens would fall  when Hajiya Aisha is sworn-in as governor should she win the appeal against the tribunal judgement,  there is unity and peaceful coexistence among the people.
In her address , Mrs Ladi John observed that those trying to fan the embers of ethnicity and religion on the verdict of the tribunal were just doing so for their selfish interests.
She stated  that the state had been governed by men who were also from a particular religion without recording any meaningful progress but were now bent on retaining power for their selfish gains.
All the speakers at the events stressed the need for continuous peace in the state to provide for an enabling environment for development.