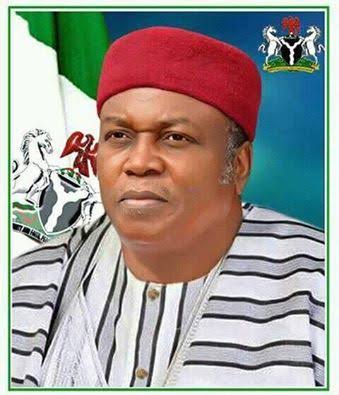 For about eight weeks now, Taraba State Governor, Darius Ishaku, has been away and the people are beginning to ask curious questions. They want to be told about his actual whereabouts and why he has chosen to stay away from home for so long despite the fact that there are so much to be done.

There are different persuasions in the state capital, Jalingo, about his actual whereabouts. While some suggested that the governor may be critically ill and is on medical observation somewhere, others guessed that he just needed a time out to freshen up for the task of running the state. Most people in his government, however, insisted that the physical absence of the governor has no effect on the smooth running of the state and governance, Bala Dan Abu is his Senior Special Assistant on Media. He defended his principal saying that it is inconsequential where the governor stays to carry out his state work:

“That is his office and teams are alongside him. I believe he is there in the interest of the state. That is why he is in Abuja attending to the paramount issues that will be of help to the state. That has not stopped anything from moving. Activities are still going on in various projects. People are also paid their salaries. I see no need for people to complain. I consider it unnecessary.”

But his view is entirely different from that of Umar Tundiri, an indigene of the state. He insisted: “Everything is wrong with the governor relocating to a different state, abandoning his own state and the people who elected him for so long.

“If the governor is sick and receiving medical attention, then the people should know and must know. He is our governor. We elected him and so we should know about his state of health. But if he is not sick and has decided to abscond from the state for nearly two months now, then something is fundamentally wrong.

“If the state were not conducive enough for him to stay here, then he should make it conducive. That is why we gave him our collective mandate.

“To further worsen the situation, he did not transmit power to his deputy. The budget was taken to Abuja for him to sign. If the deputy was acting in his stead, then he could have signed the budget here.

“I think it is very important that our leaders realise that they are dealing with people who are not all illiterates. They should show some respect for our sensibilities.”

“The interest of the people of Taraba State remains paramount to the governor. He is doing all things to ensure he improves the welfare of Tarabans. And nobody is complaining of government failure in any aspect, the government is very alive to its responsibilities.”

But some people believe that the governor’s absence is doing a lot of damage to the state. Mr Joseph Ulega noted that his absence maybe responsible for the resurgence of crimes, especially kidnapping, in Jalingo: “It is only someone who is ignorant that will say the absence of the governor does not affect anything in the state.

“If you could remember, after the arrest of Wadume (Hamisu Bala) and his boys sometime in August last year, the issue of kidnapping was almost forgotten and residents went back to sleeping with their eyes closed. Now, because the governor is no longer on ground, you will notice that the ugly trend is not only back, but also on the rise.

“Multi billionaire businessman Mr Uche Obi was kidnapped, NBA vice chairman has fallen victim and so are several others. This is happening because the governor is not on ground. It is just like the landlord leaving his house for too long. With time, everyone will start feeling like a landlord and they will do as they please because there is no one to check their excesses.”

However, former Minority Leader in the State House of Assembly, Ibrahim Imam, said the resurgence of crimes has really nothing to do with the governor’s absence: “I think people are just being too sensitive.

“Even if the governor were to be in the state at the Government House, how many people go there to see him? It is not like his absence has stopped tap water from rushing, or caused delay in the payment of salaries or execution of any projects in the state.

“The governor is not missing. People have been meeting with him in Abuja on a regular basis. CAN women were there the other day, he is also meeting with a lot of prospective investors who may not be very comfortable just coming into the state.

“He has to first of all give them some assurances and the true situation report to enable them to come in. I mean there is so much going on for the good of the state. All we need to do right now is to support the governor to serve us better.”

Abu again: “I will like you to be rather careful while listening to the people from the APC in Taraba. This is because they distort a lot of facts and mix up information. There is no iota of truth in whatever they say.

“Whether they are talking about the purported abandoning of projects or whatever. The government is focused and it has a mission to achieve and those things are clearly stated for people to see and they are also being pursued. I don’t know which wrong doings they are actually talking about.

“We do not expect everybody in Taraba State to be a supporter of Governor Ishaku or the PDP. We are in a multi-party democracy. What we demand is that people should be very sincere and also be fair in their criticism of the government. They may not like the government in place because they would have preferred that their own candidates or persons in such places. But unfortunately for them it is not so.

“They should just be fair to the governor because he was elected by the masses to serve them and that is what he is doing exactly, just that people can never be satisfied. You put food inside their mouth but they will still find reasons for their criticisms. They are all around even here in Taraba.

“Whatever Governor Ishaku does for them, they would not like him. We are not grudging them but they should stop cooking lies and also stop instigating people against him. If they still prefer being opponents despite the governor’s request of them to join him, it is their choice but they should not poison the minds of others.”

Taraba State witnessed a similar situation not too long ago, when the plane conveying the then governor Danbaba Suntai crashed. He was hospitalised for several months and this led to a serious political crisis that divided the state.