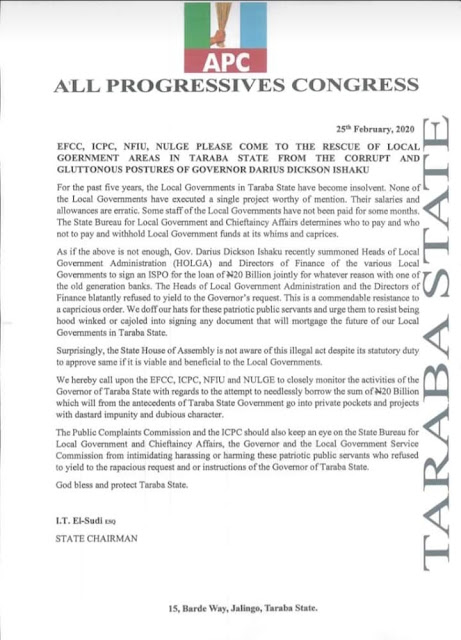 As if the above is not enough, GOVERNOR DARIUS DICKSON ISHIAKU recently summoned Head of Local Governments Administration (HOLGA) and Directors of Finance of the various Local Governments to sign an ISPO for the loan of N20 Billion jointly for whatever reason with one of the old generation bank. The Head of Local Governments Administration (HOLGA ) and the Directors of finance blatantly refused to yield to the Governor's request. This is commendable resistance to a capricious order.
We doff our hats for those patriotic Public servants and urge them to resist being hood winked or cajoled into signing any document that will mortgage the future of our Local Governments in Taraba State.

Surprisingly, the state House of Assembly is not aware of this illegal act despite it's statutory duty to approve same if it  is viable and beneficial to the Local Governments.

We hereby call upon the EFCC ICPC NFIU and NULGE to closely monitor the activities of the Governor of Taraba State with regards to the attempt to needlessly borrow the sun of N20 Billion which will from the antecedents of Taraba State Government go into private pockets and projects with dastard impunity and dubious character.

The Public Complaints Commission and the ICPC should also keep an eye on the state Bureau for Local Governments and Chieftaincy Affairs, the Governor and the Local Government Services Commission from intimidating, harassing or harming these patriotic Public Servants who refused to yield to the rapacious request and or instructions of the Governor of Taraba State.