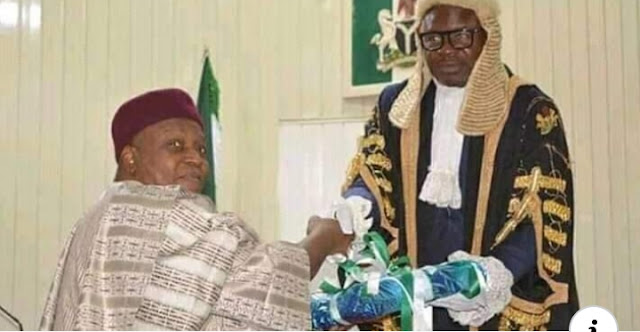 The Taraba State House of Assembly on Monday passed a Vote of Confidence on Governor Darius Dickson Ishaku, for the good work his administration is doing in the State.
The House at the resumption of plenary considered a motion brought before the House under matter of urgent public importance by the Speaker, Rt. Hon. Dr. Joseph Albasu Kunini and 11 others.
In a motion moved by the Deputy Speaker, Hon. Hamman’ Adama Abdullahi and supported by other members of the House present at the plenary, the House unanimously passed a Vote of Confidence on the Governor and his Deputy Engr. Haruna Manu for the services they have been rendering to the people of the State.
The resolution of the House reads;

“This Honourable House hereby debunks any alleged claim of non performance due to the absence of the Governor from Jalingo the State capital as the record of performance are there for all to see.”
“That this Honourable House will refuse to be used by any unpatriotic person or group of persons who for selfish reasons are making unwarranted remarks and insinuations about the health status of our amiable leader and Governor of Taraba State, His Excellency, Arch. Darius Dickson Ishaku and his administration.
“The Governor and his Deputy have performed beyond and above average within the present circumstances and that as representatives of the people, the House deemed it fit to pass a Vote of Confidence on the Governor and his administration till 2023.”

This is even as the members lauded the Governor for his numerous achievements including the recent employment of 300 vibrant youths into the state’s civil service, ongoing massive roads construction in the State, reduction in cases of violence, kidnapping and armed robbery among others.