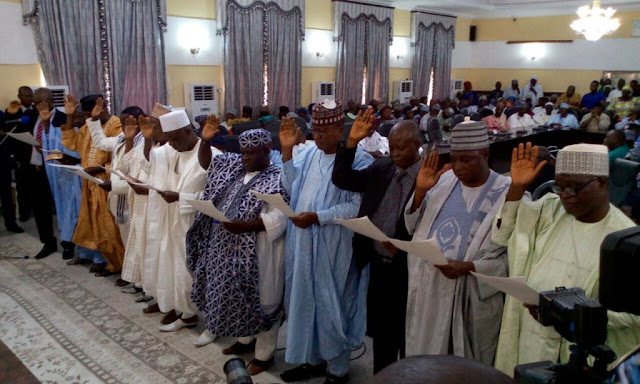 The extension of the tenure of some Permanent Secretaries by Governor Darius Ishaku is now generating ripples in Taraba state.
Civil servants have kicked against the strange extension of retiring permanent secretaries’ tenure.
Some top civil servants in the state who spoke to Blueprint on the extension said it was a violation of the civil service rules.
They lamented that governor Ishaku has set bad precedent that would affect civil service in the nearer future.
“Governor Ishaku should stop extending the tenure of permanent secretaries who has put in their years in civil service.
“Why is the governor extending the tenure of permanent secretaries who are due for retirement.
“We have some civil servants who currently are on level 17. Why not exit those who are due for retirement and promote those who would want to be a permanent secretary for just a day,” some of the civil servants who pleaded anonimity said.
Also, a member of the All Progressive Congress (APC) in the state, Mallam Nuhu Jibukivu, has emphasised the need for the tenure extension to be reversed so that the affected permanent secretaries could exist the service quietly.
He explained that failure to reverse the tenure extension would trigger other branches of public service rules with attendant negative consequences for the state civil service.
“Outside this tenure extension, this government under governor Ishaku has set a great bad precedent.
“Go round all the ministries and agencies in this state, the only tribe to see in juicy offices are the Jukuns. Once you are not a Jukun person, you will be posted to ministries where nothing happens,” he said.
He maintained that governor Ishaku has woefully failed to deliver the dividend of democracy to the people of the state.
“For crying loud, which project can you point at that governor Ishaku has carried out since he was voted as governor.
“Look at Taraba, see how poor the state is, Taraba is like a state where government is not functioning,” he said.
According to him, the absence of governor Ishaku from Taraba has added more suffering and pains to the people.
“For over 68 days he has not visited a state where his governing.
“We were told he is sick, let him come back, we have the state specialist hospital and the federal medical center that he can use. Running the state from somewhere else would not be good for the people of the state.
“You can now see the reason why Adams Oshomole before 2019 election described him as an absentee governor,” he said.