Electoral Violence: Army Hands Over 44 Suspects To Police In Taraba 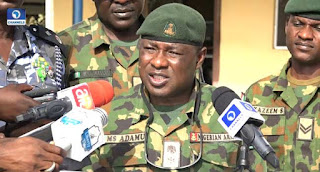 The Nigerian Army says it has handed over 44 suspects arrested for electoral violence to the police in Taraba State.
Addressing journalists in Gashak Local Government Area of the state on Monday, the Commanding Officer of 20 Battalion, Lieutenant Colonel Mohammed Adamu, alleged that the suspects were intercepted with dangerous weapons on them.
According to him, the arrest was made possible following the military operations during and after the 2019 general elections in the state.
Items recovered from the suspects include Two Dane guns, six machetes, four buses, 42 arrows, one live cartridge of 7.62mm special among others.

Adamu also reiterated the Army’s commitment to ridding the state of criminal elements in a professional manner in line with the mandate of the Chief of Army Staff, Lieutenant General Tukur Buratai.
“I am here today on behalf of the Chief of Army Staff, the General Officer Commanding 3 Division, and also the Commander 23 Armoured Brigade, to hand over suspects that were found culpable before, during and after the 2019 general elections.

“In line with our constitutional roles that we are supposed to give aid to civil authorities, the Nigerian Army in collaboration with other security agencies operated within Taraba State.
“We have gone round all the flashpoints. The suspects are those that we intercepted during the course of our operation. They were also intercepted with dangerous and offensive equipment such as two Dane guns, six machete, four buses, 42 arrows, one live cartridge of 7.62mm special,” he stated.

Similarly, the Commissioner of Police in the state, Alkasim Sanusi, said the Command has arrested  16 suspects for armed robbery, cattle rustling, rape and kidnap.
According to him, some of the suspects were caught in possession of foreign currency, also exhibited were arms and ammunition found on the suspects.