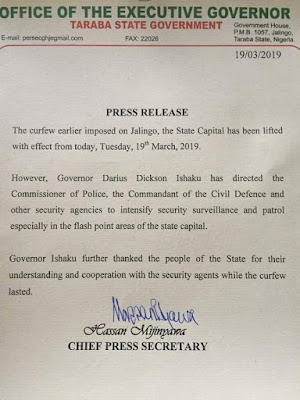 Taraba state government has lifted curfew it imposed following violence in Jalingo, the state capital and its environ.
This was contained in a statement signed and issued on Tuesday by Mallam Hassan Mijinyawa, the Chief Press Secretary to the state governor, Darius Ishaku.
ADVERTISEMENT
The statement noted that the government was satisfied with the peace in Jalingo and all part of the state and therefore lifted the curfew which was imposed on Monday 11, March, 2019 following violence in Jalingo.
Meanwhile, commercial and social activities has resumed in the state capital as normalcy returned.
ADVERT
Similarly, the Commandant of 20 Army Battalion, Lt Col. Muhammad Sani Adamu has handed over 42 suspects arrested during the crisis to the state police command.
He said the suspects were arrested by the Army at different locations in Jalingo and its environ with dangerous weapons.