Ishaku’s reelection suffers setback as APC plots to unseat him 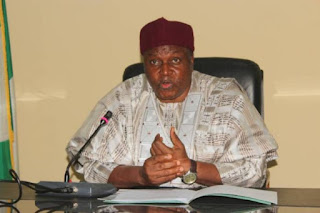 THE GUARDIAN
Political calculations of the Taraba State Peoples Democratic Party (PDP) may have suffered a major setback as Governor Darius Ishaku’s hope of emerging victorious at the March 9 gubernatorial election is being threatened.
This follows President Muhammadu Buhari’s victory at the just concluded Presidential and National Assembly elections.
Although PDP emerged victorious at the polls with 49,000 votes ahead of the All Progressives Congress (APC), political pundits have argued that PDP performed beyond expectation believing that its chances of retaining the governorship seat in the polls has dimmed.
Still dissatisfied with its performance at the polls and for the much desired victory to smile at the party, keen followers of political developments in the state insisted that the PDP should, as a matter of urgency, put its house in order.
This is because there are alleged moves by the leadership of the APC to unseat the incumbent governor.
Political watchers cited Governor Ishaku’s inability to personally reach out to the grassroots to canvass for votes but rather went ahead and left the job to party stakeholders, saying his dream of being reelected, may turn out to be a mirage.
The analysts who noted that APC’s governorship candidate, Danladi Abubakar Sani, did not only traverse the nooks and crannies of the state, but assisted President Buhari to gather enough votes from the state, may also translate to his victory in the governorship poll.
Unlike in the past where religious and tribal sentiments played vital roles in determining who ascended the governorship position in the state, The Guardian learnt that such ills are now fast giving way as some top members of Ishaku’s government, majority of who are Christians, are now rooting for APC candidates.
Some of them who offer to speak on condition of anonymity said their decision to back APC was because religion and ethnic politics have not helped the state to develop, “so some of us have decided to back out of such politics because our state is behind in terms of development.”
Such persons who seek protection also advised clerics, especially pastors to desist from dabbling into politics, but instead pray for all the political parties, as all their congregations belong to all the registered political parties in the state.
According to one of them, the most annoying thing is that some pastors have turned the alter of God to campaign grounds because instead of them to preach salvation, they now go as far as telling their congregations who to vote for.